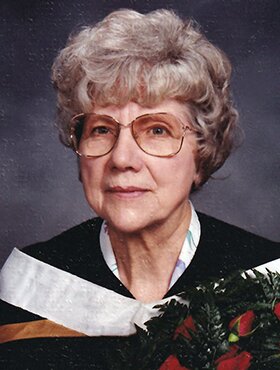 Please share a memory of Annie to include in a keepsake book for family and friends.
View Tribute Book

Anne Ingeborg Williams (nee Simrose), beloved wife of the late Cyril Williams, passed away peacefully at home in Calgary on Saturday, January 21, 2023, at the age of 98 years.

Anne’s family wishes to acknowledge and thank her physician, Dr. Linda Mofford, as well as the numerous home care staff from Bayshore HealthCare and Focus on Caring for the concern, care and compassion shown to Anne during her final years.

Anne was born and raised on the family homestead, "Simrishill" farm, near Darmody, Saskatchewan, and resided in Saskatchewan, British Columbia and Alberta during her lifetime.

Anne, with a family of three children from an earlier marriage, married Cy Williams on April 26, 1957, in Calgary, AB. Anne and Cy added two more children to their family and enjoyed many happy years together in Calgary. As Cy’s health declined during his final years Anne was his devoted caregiver.

Following Cy’s death, Anne eventually moved to an assisted living residence in northwest Calgary where she was nearby to family.

At age eighteen, after completing high school in Saskatchewan, Anne obtained a teaching certificate through a special shortened program, an opportunity that arose from a shortage of available teachers during wartime in the early 1940s, and began teaching at Meadow Lake, SK.

After her first marriage ended, she eventually relocated to Calgary, AB and, after taking additional education courses, obtained her teaching certificate and taught public school in Calgary for several decades. During her teaching career Anne continued taking summer courses at the University of Calgary, earning a Bachelor of Education degree in 1978.

After retiring from teaching, she went on to get a Bachelor of Arts degree after completing one final summer course in English history at Oxford in England in 1991. Afterward, Anne took several Elder Hostel courses, often with Cy, that took them to such places as Nova Scotia, the Shuswap and Iqaluit, combining Anne's interest in continuing education with a love of traveling.

Anne's many travels included visits to England, Greece, Kenya, Alaska and across Canada—sometimes traveling solo and other times accompanied by Cy. A few of Anne's hobbies included her love of reading and pursuing her interest in painting water colours. Numerous family members and friends have some of Anne's many water colour paintings hanging on their walls.

A memorial service for Anne will be held at a later date to be determined.