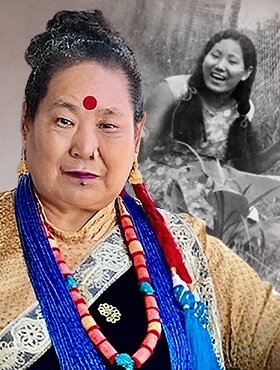 Please share a memory of Dhan to include in a keepsake book for family and friends.
View Tribute Book

It is with deep sorrow that we announce the passing of Dhan Kumari Gurung, age 65. Dhan passed peacefully in her sleep in the early hours of Friday, on January 06, 2023, at the Peter Lougheed Hospital, Calgary, AB surrounded by family members.

Born in a mountain village of Tangle, Parbat of Western Nepal, Dhan grew up in Nepal, Singapore, Brunei, and Hong Kong, when her father was serving in the British Gurkha Army and then made Calgary home when she immigrated with her family in 2006.

Dhan married Lalit (former British Gurkha Army) in 1977 and together they travelled around in southeast Asia (Hong Kong, Brunei and home country Nepal) during his British Army posting, where their elder son Roshan was born in Nepal, daughter Shabnam and son Suman were born in Hong Kong.

Dhan is survived by her loving husband Lalit of 46 years, her mother Ash Maya Gurung (90 years), her sons Roshan, Suman, daughter Shabnam; her five grandchildren, Henjaina, Hevel, Aarsha, Nirosha, Akeesha; and her brothers Gunjaman, and Kul Bahadur. She was also a loving aunt and grandmother to numerous nieces and nephews.

Dhan was truly one of a kind; proud, caring, independent, and loving, in her beliefs. She made friends with everyone. She was a wife, mother, grandmother, aunt, sister, and friend. Dhan will be dearly missed and forever remembered. She enjoyed taking care of others and serving others with her cooking which brought her joy.  She will be most remembered for her compassion.

Dhan’s family would like to thank both staff and residents at Peter Lougheed Hospital Unit 4922 for their care and friendship.

If friends so desire, memorial tributes may be made directly to the Canadian Cancer Society, 200 – 325 Manning Rd. N.E., Calgary, AB T2E 2P5 Telephone: (403) 205-3966, email donorservices@cancer.ab.ca.  Condolences, memories, and photos may be shared and viewed here.