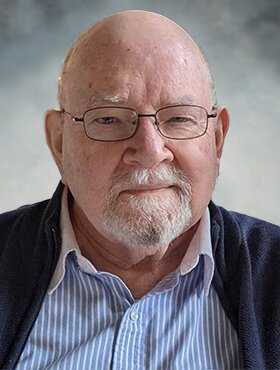 Garry was born in Calgary, AB on March 29, 1940. He moved to Edmonton in 1974 to work as an instructor at NAIT.  After his retirement, Garry spent the winter months in Thailand and summers in Calgary.

Garry accomplished much throughout his life including a science degree, a teaching degree and a master’s degree in mathematics.  He had a passion for teaching and spent most of his career sharing his love of stats and spreadsheets with his students in the math department at NAIT. Garry also always had stories to share about the many years he taught for the Calgary School Board.  He coached track and field, co-founded the first women’s recreational basketball league in Calgary and when his sons were young, he enjoyed coaching them hockey. Ultimately, he found his place as number one fan in the stands.  He was passionate about anything his children and grandchildren were into and continued to be a dedicated fan even from his room at Agape Hospice. Anyone who met Garry was subjected to a witty pun or a corny math/science-related joke.

Gerald was predeceased by his parents Janet and Fred Worger and his brother Denis Worger of Calgary, AB.

There will be a celebration of life scheduled in the Spring of 2023. Condolences, memories and photos can also be shared and viewed here.