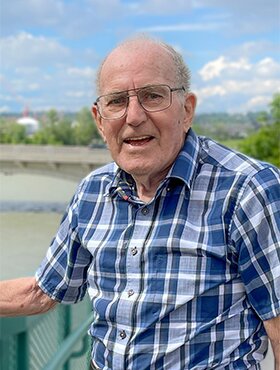 Please share a memory of Ralph to include in a keepsake book for family and friends.
View Tribute Book

Ralph Hielema of Calgary, died peacefully at home with his wife Gertie by his side. Family was very important to Ralph. He spent his final weekend with his children and grandchildren as they all gathered together with him one last time. Ralph was a kind and gentle man. He was 84.

Ralph was a much-loved husband, father, grandfather and great-grandfather. He leaves behind Gertie, the love of his life for 64 years, as well as his children, Marlene (Arlene), Jeffrey (Rita), and Christopher (Viki); his grandchildren, Curtis (Sara), Branden (Amanda), Tristan, Makyra, and Shawn; his great-grandchildren, Sigrid, Thorunn, and Graylynn. Ralph was a man of faith and prayed for his children and their families every day. Ralph had many extended family members and friends who will also miss him dearly.

Ralph was born on March 15, 1938, in Oldekerk, Groningen, in The Netherlands. Like many Dutch people after WWII, he immigrated to Canada with his parents and siblings and settled in Ontario in 1949. He was still young enough to go to school, and he went on to Ryerson Institute of Technology for post-secondary studies in chemistry. He met his wife-to-be in 1954 in the Holland Marsh right after her family immigrated to Canada. They married in 1958.

Ralph farmed for several years near Pickering, ON while also working full time in Toronto. In 1971, the family left the farm and moved to Calgary, which he considered his true home. Ralph and Gertie also lived in Edmonton, Red Deer, Montreal, Orangeville and Ingleside. They returned to Calgary in 2007 to retire and be closer to their children and grandchildren. Ralph loved being in the mountains with his family, camping, skiing and hiking. But, he also loved a prairie drive to see the canola fields, especially if there was a stop for a vanilla milkshake along the route.

Ralph had that immigrant work ethic. During his long career, he enjoyed many jobs and manufacturing projects which took him to six continents from the north to the south ends of the globe. His passion was making things run better. He could envision huge and complicated manufacturing processes right down to the fine details of pumps, motors and switches. He developed and refined many systems for making coatings and adhesives for things like hockey stick tape, pipeline coatings, urethane insulation, double-sided tape, duct tape, and medical wrap. His last major project was a Tuck tape manufacturing line in Cornwall, ON. Fun fact: One of Ralph’s early jobs was developing the adhesive for Curad Ouchless bandaids. His best advice was, “do not rip the bandaid,” and he educated all medical staff who cared for him over the years about pulling medical tape off very slowly. His nieces and nephews will also remember his super long multi-person crazy carpets, and, of course, all the cases of tape he gave them.

Ralph was also a home handyman and finished off or renovated his own and his kids’ houses. He could do electrical, plumbing, painting, woodwork, flooring, drywall, tiling, kitchens, bathrooms with heated floors - you name it. Wherever there was a problem or a project, Ralph could figure it out.

Cancer had affected Ralph personally, as well as several of his close family members, including Gertie. Always wanting to give back, he became a volunteer driver for the Canadian Cancer Society in Calgary for a couple of years. He met many wonderful patients on the way to their appointments.

The last years of Ralph’s life were affected by Parkinson Disease. When first diagnosed he researched Parkinson and he also became the subject of many medical studies. He was active in fitness and wellness programs and did everything he could to live well with Parkinson. The last months were the hardest on both Gertie and himself due to the progression of the disease resulting in increased physical limitations. Gertie did most of his loving care right until the end.

A Celebration of Ralph’s life will be held at a future date in 2023. Condolences, memories, and photos may be shared and viewed here.