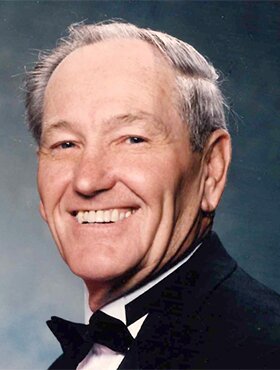 Please share a memory of Kenneth to include in a keepsake book for family and friends.
View Tribute Book

Kenneth Kaiser of Calgary passed away quietly at the Peter Lougheed Hospital on Thursday, December 1, 2022 at the age of 92. He was born in Calgary and grew up in Bridgeland /Riverside. Growing up Ken was very active and was involved in all kinds of sports at the YMCA, handball and wrestling were a few that he competed in, and won provincial championships. When he wasn’t competing in sports, he would be riding his Indian motorbike or enjoying time with his family and friends. It was on a Skating outing with family that he met the love of his life, Marguerite. He would often comment she was the most beautiful nurse he had ever met. On May 2, 1957, they were married. They built their dream home in Brentwood where they raised three children Donald, Ted, and Laurie.

Ken was a man with a firm handshake and a big smile. He could be found with the family out on adventures from camping through Alberta and BC to road trips to the US and Mexico. He also enjoyed countless fishing trips down the Bow River, with his family and friends.

In the early 1980s, Ken and Marguerite purchased property in the Baynes Lake area with his brother Earl (Posty), sister Doreen and family.  It was a great place to relax, socialize, fish, hike, and golf. Ken loved family gatherings especially, weddings. He will always be remembered for his countless hours on the dance floor smiling and laughing with a dance style only Ken could pull off.

Construction was a large part of Dad’s life. His lifelong career was as a Sheet Metal Mechanic at Reggin Industry. Ken was diligent at his work and became a manager for the company. He was a skillful tradesman, he would build homes and garages, repair cars, and anything else that anyone needed to be fixed.  He was generous with his time and talent.

Ken will be dearly missed and is survived by two sons and daughters-in-law, Don and Elizabeth, and Ted and Kathy; four grandchildren Christin, Colan, Candice, and Chelsey; as well as five great-grandchildren Emaya, Audrey, Maverik, Wrenly, and Nora along with numerous nieces and nephews. He was predeceased by the love of his life Marguerite and his precious daughter Laurie along with all his siblings and their spouses.  We will be having a Celebration of Life for Ken and Marguerite in the spring exact date and place to be determined   Condolences, memories, and photos may be shared and viewed here.