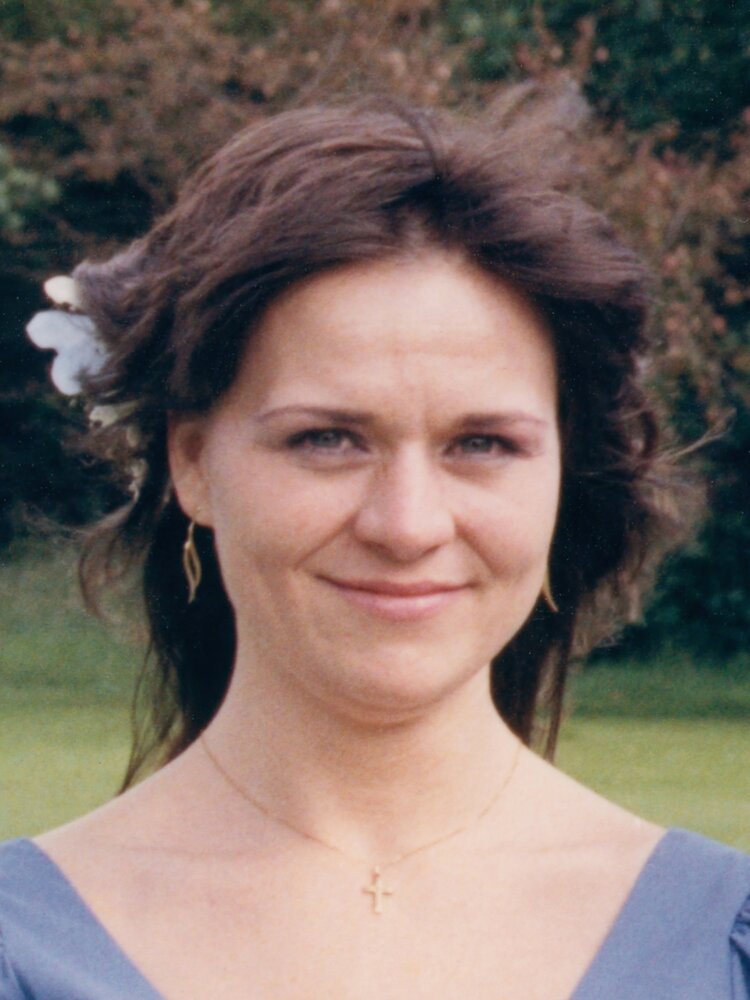 Please share a memory of Gloria to include in a keepsake book for family and friends.
View Tribute Book

Gloria was born in Glasgow, Scotland on April 2, 1961. Her parents were Marjorie Capaldi (nee McIntosh) and Peter Capaldi.  She grew up in Bishopbriggs in her family home on Tofthill Avenue. She was the first of three children, followed by her brother Peter Capaldi (1963) and sister Joanne Capaldi (1971), both of whom have predeceased her.

Early in their lives, Gloria’s parents were singers in the entertainment industry.  Peter had a radio show in London before he returned to Glasgow to work alongside his brothers in the family ice cream business. He was also an amateur painter, creating several pieces specifically for Gloria which she treasured and adorn her home to this day.

In Gloria’s childhood home, there was always music, singing, and frescos. This gave Gloria a lifelong passion for dance, having also attended dance classes as a young child. She particularly enjoyed tap dancing and was very proud of her Gregory Hines black and white tap shoes.

She studied for a Bachelor of Education degree at St. Andrew’s College of Education in Bearsden, Glasgow, graduating in July 1983 at the top of her class.

Unable to find full-time work in Glasgow, Gloria took a bold step and moved to London in 1985, working in George Spicer Primary School, where she remained until 1987. Gloria was an exceptional Primary School Teacher and was very much loved and adored by her students over her eleven-year career in both London and Aberdeen.

Gloria met Andrew on July 3, 1987, in the Punch & Judy pub in Covent Garden, London.  It was love at first kiss. The date was so important to Gloria that, after Andrew proposed almost three years later, she insisted on being married in St. Matthew’s RC Church on the same date, July 3 1990 in her hometown of Bishopbriggs, Glasgow.

Gloria and Andrew lived and worked in Aberdeen, Scotland from 1989 to 2005, with a two-year period in Australia, where Zoë was born in 1997.  Gloria and Andrew immigrated to Canada in 2005.  Now a homemaker, she devoted her time and love to her family.

Gloria was a huge fan of the Disney theme parks in California and Florida, with countless holidays spent there with Andrew and Zoë.  She was also proud about her Italian heritage, spending her honeymoon in Sorrento and subsequently holidaying in Rome, Florence, Cattolica, and Venice.

One of Gloria’s favourite quotes, from the C. S. Lewis book, The Magician’s Nephew, is, “Make your choice, adventurous Stranger; Stroke the bell and bide the danger, Or wonder, till it drives you mad, What would have followed if you had.”  It was this that helped Gloria decide to make the daunting move to London for work in 1985.  If she hadn’t, she would never have met Andrew!

She will also be remembered for her love of theatre and Hollywood musicals, primarily those classic MGM movies. A particular favourite scene of hers was from The Court Jester, the classic, “The pellet with the poison’s in the vessel with the pestle.  The chalice from the palace has the brew that is true”. Gloria particularly loved the Barbra Streisand movie, “A Star is Born” and her party piece was to sing the “Queen Bee” song.

A familiar sound around Gloria’s home was the clip-clop noise she created when walking in one of her many pairs of Dr. Scholl’s original Italian wooden sandals.  She was very much a 70s girl!  The sound of this is now greatly missed.

While Gloria loved and cared about all animals, wolves were by far her favourite, with photos of them scattered liberally throughout her home.

Very much the matriarch of the family, the loss of Gloria has left a massive void in Andrew and Zoë’s lives.

Gloria was predeceased by her parents and her brother and sister. Condolences, memories, and photos may be shared and viewed here.

If friends so desire, memorial tributes may be made directly to the World Animal Protection (formerly World Society for the Protection of Animals), https://www.worldanimalprotection.org/ or the David Suzuki Foundation, https://davidsuzuki.org/.