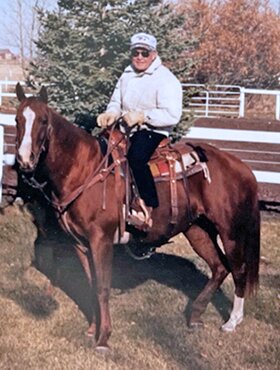 Please share a memory of Donald to include in a keepsake book for family and friends.
View Tribute Book

Born in Calgary, AB, Don grew up in the city with his parents Arthur and Letitia Postlewaite as well as his brothers, Art and Al, and his sister Margaret (Collins), all of whom predeceased him.

He graduated from Western Canada High School and went on to attend college in Santa Rosa, California. He eventually returned home to Calgary to accept a position with Standard Oil Company as a Landman, and eventually earned the position of Land Manager with what was to become Amoco Canada Petroleum, now BP Canada. His son Kerry and daughter Patti followed Don into the oil and gas sector.

Throughout his early life, Don was involved in many team sports and given the nickname "Pistol" by his teammates due to his tenacity and commitment to everything he did. Don's interest in horses led him to meet the love of his life Nadine, a farm girl from Standard, AB who predeceased him earlier this year. Don and Nadine were married in Standard and started their family with first son Kerry, who predeceased him in 1999, and second son Scott (Linda) their children, Justin and Shelby, and their daughter Patti. Don was always the great provider for the family and was supportive of all the kid's and grandkids' activities as they grew up, be it hockey, figure skating, rodeo, music, baseball, hunting, horse showing, or swimming. He loved it all!

As an avid horseman and athlete, Don played baseball, football, hockey, and a number of other team sports throughout his childhood and adult life, playing hockey with the Trail Smoke Eaters and in the Big 6 league later on. Don coached his son Kerry on the provincial champion Buffalo Stampeders and later acted as a scout for "Badger" Bob Johnson at the University of Wisconsin.

Don was the first secretary for the inaugural Alberta Quarter Horse Association and was a respected breeder and showman. His mare "Koko Kilebar" became the top halter and performance horse in the province of Alberta. We also fondly remember watching Dad from the chutes at the Calgary Stampede and other meets as Dad was an outrider in the chuckwagon races for the Dingwall Ranch Outfit. His involvement with the Calgary Stampede was carried on as a volunteer for over fifty years; as a chuckwagon judge, Chairman of the Stampede Queen Committee, and eventually bestowed the title of Honorary Life Member of the Calgary Stampede. His son Scott and granddaughter Shelby have followed in Don's cowboy and volunteer footsteps.

Don and Nadine enjoyed many sports together, with a close-knit group of friends from hockey, tennis, golf, and cross-country skiing. In retirement they also spent winters on the beach in Hawaii and time with their friends on the golf course in the Arizona sun.

Don was always looking after his personal fitness and survived a heart attack and two bouts of cancer, proving to us all that he was as tough as everyone said he was. The past few years were challenging for him dealing with short-term memory loss, but we had great conversations about the "good old days". Everyone who knew Don or was lucky enough to meet him always knew that integrity and loyalty were his best qualities.

We would like to thank Dr. Rebecca Leonard and all the wonderful staff at Revera Scenic Acres in NW Calgary for their excellent care of both Don and Nadine for the past three years. Condolences, memories, and photos may be shared and viewed at www.calgarycrematorium.com