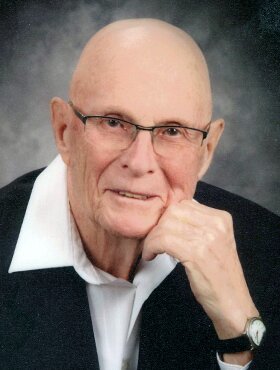 Please share a memory of George to include in a keepsake book for family and friends.
View Tribute Book

George worked for Imperial Oil in various roles between 1947 and 1982, after which he and Joan retired to farming life in Water Valley. After returning to Calgary in 2013, they made their home at the Manor in Signature Park.

A Memorial Gathering in George’s honour will be held at the Sheraton Four Points Hotel (8220 Bowridge Crescent NW, Calgary, across from the COP), on Saturday, October 15 at from 2:00 to 4:00 p.m. There will be no service by George’s request, with arrangements through Heritage Funeral Services Ltd. Condolences, memories, and photos may be shared and viewed here.

If friends so desire, memorial tributes may be made to a charity of your choice.