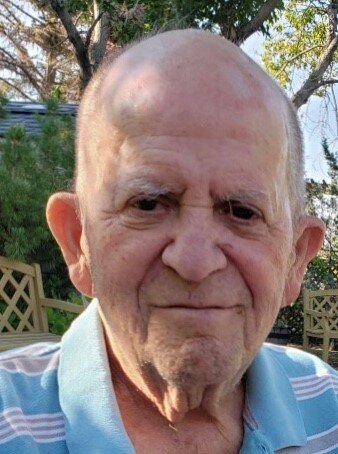 Please share a memory of Charlie to include in a keepsake book for family and friends.
View Tribute Book

Charles Liegerot, beloved husband of Pam Liegerot (nee Wilson), of Calgary, AB, passed away on Sunday, September 4, 2022, at the age of 89 years.

Charles was born in Tonkawa, Oklahoma, USA, on October 14, 1932. After a childhood of running in the fields at the family farm, winning spelling bee competitions, and academically accelerating through school, Charlie started University at the age of 16. He was drafted into the US Army at 18 years old. After basic training, he was stationed in Heidelberg Germany, playing Tuba for the 33rd Army Band. He returned home and continued his studies. He graduated from the University of Oklahoma and began a career in music education.

In the late 1960’s, The Calgary Catholic School Division recruited Charlie to promote and start the instrumental music programs in their schools. He gathered resources and traveled from school-to-school teaching band classes. He continued to mentor newly hired music teachers even when he became the full-time band and choir director at St. Francis High School. He taught there for over two decades.

Students say they never encountered a teacher like him. Charlie taught with humour, encouragement, and compassion. His music classes were not only entertaining, but they also provided a safe place for students to convey their deepest emotions with a single note. Charlie’s door was always open; his office was a student hangout complete with a couch and strobe lights. His passion and love for music inspired many. Students, Steve Bridget, Glen Merkosky, and John De Waal formed a band in his name, “Charlie’s Boys”. Besides pursuing music as a lifelong hobby, a number of his former students became professional musicians and music educators.

Charlie and Pam spent 50 years together. The dynamic duo were avid bridge players and enjoyed many summers at “the cabin” in Windermere, B.C., fly fishing, relaxing, and reading. Once retired, they were finally able to spend extended time with family in Oklahoma. They also escaped Canada’s cold winters by travelling in their fifth wheel for sun and fun in Kino Mexico, a small fishing village on the Sea of Cortez. Despite Charlie’s failed birthday and anniversary gift choices, the love and devotion they had for each other was steadfast. Pam was truly “Charlie’s angel” during his years of failing health.

Charlie was truly one of a kind and will be missed. Those that knew him have their own legendary story to tell. He will be forever in hearts.

Charlie was celebrated by family and friends in life. The family would like to sincerely thank the wonderful staff at the Carewest George Boyack for the care and kindness they gave to Charlie in his final weeks.

If friends so desire, memorial donations to support Calgary area school bands may be made directly by e-transfer to The JD Music Society, dewaalj@shaw.ca.