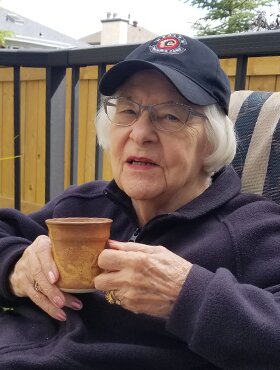 Please share a memory of E. Kathleen to include in a keepsake book for family and friends.
View Tribute Book

Kay was born in Birtle, MB, and grew up on the family farm north of Isabella, MB. She married Bill Kelly in 1951. Bill and Kay’s married life began in Winnipeg, where their daughters were born. Bill’s job with the Royal Bank had the family moving from Winnipeg to Pierson, Hamiota, Rivers and back to Winnipeg to support Bill’s failing health. After Bill’s death in 1974, Kay reinvented herself, finding a job at a jewelry boutique.

She met  Lloyd Wiebe, and they married in 1977. They moved to Saskatoon for work opportunities in 1978. Kay and Lloyd enjoyed gardening, traveling in their camper van, and their cottage at Madge Lake. After Lloyd’s death in 1999, Kay decided another change was in order. She moved to Calgary in 2002 and began again. Her health was significantly impacted by Alzheimer’s Disease, necessitating moving to a supportive care facility then a nursing home. As someone who greatly valued her independence, Kay found her increasing dependence on others frustrating. Her sense of humour and love of conversation allowed her to laugh and enjoy time spent with family.

Cremation will follow. There will be no service. Internment of her ashes will occur at a later date. Condolences, memories, and photos may be shared and viewed here.