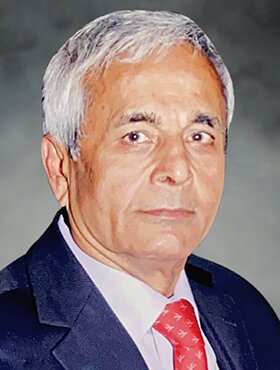 Please share a memory of Nabhu to include in a keepsake book for family and friends.
View Tribute Book

We are sad to announce that Mr. Nabhu Davé passed away peacefully from natural causes on Saturday, July 23, 2022 at the age of 84 years.

Nabhu was predeceased by his eldest child Renuka. Nabhu is survived by Shanta, his loving wife of 62 years, his son Ronak, daughter-in-law Krista, two granddaughters, Alisha and Lianna, as well as his three siblings and their families.

Nabhu was born in India but lived most of his life in Calgary, having spent some time in London, England, and Kenya. He had a very jovial nature, always joking and laughing. Most of all he enjoyed spending time with his family. As a teenager and young man, he was the best uncle and older brother one could imagine; always having a lot of fun and letting you do things he felt confident you could do but were not allowed to do. Though Renuka had her own medical conditions/concerns, Nabhu was always there for her and was happiest when he was with her. After she passed away in 2017, he always looked forward to visits from his granddaughters and family. He caught up on his education later in life since he was too busy with family and other responsibilities in his youth. He was meticulous to a fault, whether making coffee in his favourite coffee machine, looking after his prized possessions, the clothes he wore, and in his work. His love of travel took him often to Hawaii but also to England, California and Panama to visit family and to explore new places.

If friends so desire, memorial tributes to a charity of your choice will be appreciated.

There will be private service for close family and friends, as was his request.