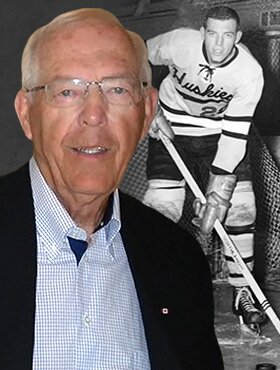 Jerry was an exceptional athlete and had a stellar career in junior hockey as a defenceman, where he was ranked as an elite NHL prospect. He attended Crescent Heights High School and continued with a full hockey scholarship to Michigan Technological University. While at Michigan Tech, Jerry was Vice Archon of his fraternity Sigma Rho. He graduated with a BSc in Business Administration and then returned to Calgary where he began his life with Donna.

Jerry was a true entrepreneur and with the knowledge he gained through many executive positions with the Indal Group, Western Aluminum and Westwood Windows, Jerry fulfilled his dream of starting his own business. In 1981, Jerry, Donna, and their dog, Muffy, founded Nose Creek Forest Products, which manufactured wood components for windows and doors, and produced MDF mouldings. The trio grew the enterprise into one of the largest of its kind with more than 100 employees.

After his retirement, Jerry was honored by the Canadian Window and Door Industry when he was made a Pioneer of the Industry for his significant contribution to the industry’s development. During his retirement, Jerry and Donna enjoyed vacations, spending time in the Arizona sun, golfing with friends, and having the time of their lives. Jerry was an avid golfer, belonging to the Bearspaw Golf and Country Club, as well as enjoying his love of sports and fitness at the Calgary Winter Club. He loved to spend time with his kids and grandchildren watching and coaching their sports. He also enjoyed skating at the Olympic Oval and skiing in the mountains of Alberta.

The Orpe family wishes to express their gratitude to the staff and many caregivers at Bethany Harvest Hills for their love and care of Jerry during his stay. He will be dearly missed by all of those who were a part of his wonderful life. He was a true gentleman to the very end.

Jerry will be laid to rest with a private family ceremony. If friends so desire, memorial tributes may be made directly to The Alzheimer Society of Calgary, 800, 7015 Macleod Trail S.W., Calgary, AB  T2H 2K6, Telephone: (403)290-0110, www.alzheimercalgary.com Condolences, memories, and photos may be shared and viewed at www.calgarycrematorium.com.