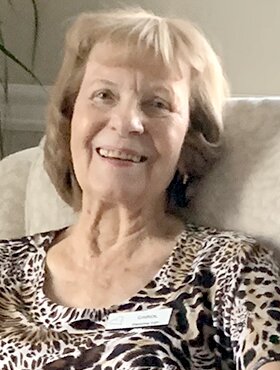 Online - Direct Website www.cmpnrf.ca Donators can click on the donate button, and indicate in the donation who the donation is being made in memory of. An instant receipt is issued, through our system, however we will send a official charitable receipt out via email to the donor. Canada Helps.org www.canadahelps.org. - Search for Canadian MPN Research Foundation. Donators will receive an immediate charitable receipt from Canada Helps on our behalf. Pay Pal There is a link on our website to make a donation though paypal. The CMPNRF will send out an official charitable receipt to the donor, if a donation is made through pay pal. Snail Mail: Our mailing address is: The Canadian MPN Research Foundation PO Box 64538, Unionville, ON L3R 1M0. Once donations are received, a charitable donation will be sent to the donor either by mail or by email.

Please share a memory of Carol to include in a keepsake book for family and friends.
View Tribute Book

Carol passed away peacefully with family by her side on Tuesday, May 31, 2022, at the age of 86 in Calgary.

Upon leaving Crescent Heights High School in Calgary, Carol, a single mother, became an accomplished fashion model, working for some of the largest department stores in Canada including “The Bay” and travelling to photo shoots around Western Canada and Ontario. Carol later worked as an office assistant for an oil and gas company in downtown Calgary where she met and married the love of her life and husband for 62 years, Bill Herron, in August of 1959.

Carol and Bill were enthusiastic pilots and purchased their first airplane in 1960. Carol qualified for her private pilot license in December of 1961. An incredible accomplishment for a woman during this era! In 1968, Carol and Bill purchased the Mt. Norquay ski area in Banff, AB, which they operated together for the next ten years. During this time, both Carol and Bill were very involved in supporting the Banff community and active in politics. Returning to Calgary, Carol went on to obtain her real estate license, and retired as an award-winning Calgary ReMax Realtor in 2012.

Carol was a huge supporter of Bill’s work on the Board of Directors for the William S. Herron Family Charitable Foundation, helping to identify and direct funding to worthwhile causes in Calgary. She was invited to become a director of the Foundation upon Bill’s passing in 2020. Carol was passionate about her charity involvement. Carol was a strong-willed, creative and caring person who was deeply devoted to her husband, family, and friends. Lovingly remembered for her quick-wit, kind nature, sense of adventure, and will-to-survive against the odds. Carol loved to fly, ski, camp, boat, hunt, garden, sew, golf, cook, entertain, and travel, including winter holidays spent in Hawaii, Phoenix, and Palm springs.

Carol was predeceased by her parents Carl and Evelyn Glambeck and by her two brothers  John, and Ken. She is survived by her sister Gail Sherley (nee Glambeck) of High River AB, sons Brian, and Stewart of Calgary AB, daughter Shelley Herron Dean of Port Moody BC, grandchildren Sonja Harasimowicz (nee Herron) of Mississauga ON, Nicholas Herron of Edmonton AB, Bailee Herron of Calgary  AB, and Levon Dean of Port Moody BC, great-grandchildren Sophie, Aria and Max Harasimowicz of Mississauga, ON.

Funeral Services will be held at Calgary Crematorium Chapel, (3219 – 4th Street NW, within the valley of Queen’s Park Cemetery) on Saturday, June 18, 2022, at 2:00 p.m. Graveside Service to follow at Calgary Crematorium Columbarium. Reception to follow at the Funeral Home. Family and friends who are unable to attend in person are invited to join Mrs. Herron’s service streamed live on the day of the service at www.calgarycrematorium.com. For those who are unable to view live, a recording of the service will be posted. Condolences, memories, and photos may also be shared and viewed here.

We apologize if this is the case with today’s live stream, but we want to assure you that this service will be recorded and uploaded following the service.