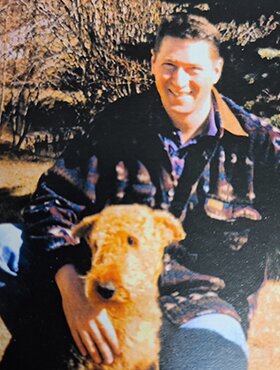 Please share a memory of Michael to include in a keepsake book for family and friends.
View Tribute Book

He is survived by his sister Marilyn of Salt Springs Island, BC, brother Paul Lawrence, partner Arianna French of New York, NY, sister and brother-in-law, Dianne and David Roberts; niece Sarah of Selby, ON, and his beloved dog Buster the second. He was predeceased by his parents, Mike and Loretta Lawrence of Regina, SK.

A graduate of the University of Regina in English, Michael enjoyed a highly successful career within the strategic corporate communication and public relations sectors, primarily in Canada’s energy industry. Michael was an avid horse and dog enthusiast, especially devoted to the Airedale breed. His dogs were in love with him, and he with them; Susie, Buster, Tex, Frank, and Buster #2.

Michael loved spending time outdoors; hunting upland game in SK, and Montana, fishing in AB, an BC’s River systems (he loved a bull trout expedition), walleye fishing at Last Mountain Lake, and trout and pike fishing at Lac La Ronge. Michael had a deep appreciation for the east Kootenay region of BC, Calgary and surrounding area, and the prairies.

Michael was a highly intelligent and sensitive person he was a lover not a fighter. His friends were his passion and planning and executing weekend capers were his speciality. Michael had so many pursuits; a deep and eclectic love for music from rockabilly (Haskil Askins, Webb Wilder, and the Reverend Horton Heat) to the funk music of Bootsy Collins, the ska music of the Specials, Jerry Jeff Walker, and many others in between (Michael just recently christened his love of the Red-Hot Chili Peppers with a new “Unlimited Love” tattoo). His incredible taste for high-end and low-end food, he loved a good beefsteak done right, but he also was a big fan of any flavour of squeeze-a-snack, cocktail sausages, chicken gizzards, smoke oysters, eggs in any form (pickled and devilled particularly), Tumblers Pizza (#21 and #2) and any burger if it was huge!

Michael was a sports fan with a habit of changing his favourite NFL team, he didn’t deny that he was a Habs fan, he followed the Riders, but he was most devoted to the New York Yankees and kept a vigil for Yankee catcher Thurman Munson every August 2, the day in 1979 that Munson died in a plane crash.

We plan to organize a Celebration of Michael’s Life in the summer, both in Calgary and Regina, with dates and venues to be determined. Condolences, memories, and photos may be shared and viewed at www.calgarycrematorium.com.

Michael always had an attitude of let’s seize the day and live for the moment, which we will try to do. So many stories to share and Michael gave us all great material. We will try, but none of us can tell a story like Michael could, as a true raconteur, he would be the best one to get his stories told in a way that would captivate and entertain us, wherever he is now, I am sure he will be listening and laughing with us. Michael, we miss you so much, but you gave us many things to keep your spirit alive. “Good night sweet prince”.