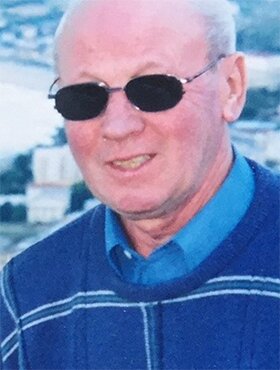 John McLaren passed away on Wednesday, April 20, 2022, at the age of 93 years.  John was born and raised in Causewayhead, Scotland, home of the Wallace Monument. John in his younger days played semi-pro football (soccer) for Aucherarder Primrose and was a standout. He also had a great admiration for the game of golf. This was evident with the several trips he took with his friends “The Dirty Dozen”, to the U.K. to golf, and with his sons locally.

John had several job positions, the latest was with Co-operators insurance where he worked for twenty-five years as a top producer. John volunteered at Bethany Care Center from the age of 65 through 75, reading, talking, and spending time with the patients there.

John is survived by his sons and daughter-in-law, Michael (Maria) McLaren, and Ross McLaren; step-grandchildren Damien and Chelsea Camatta; brother and sister-in-law, Tom (Myrna) McLaren; and sister Bett Imrie of Scotland; as well as numerous nieces, nephews, cousins, and friends. Condolences, memories, and photos may be shared with John’s family here.

His generosity to friends and family was well known. If friends so desire donations can be made to STARS -Alberta Shock Trauma Air Rescue Service Foundation Calgary Base, 1441 Aviation Park N.E., Box 570, Calgary, AB T2E 8M7 in lieu of having a service.