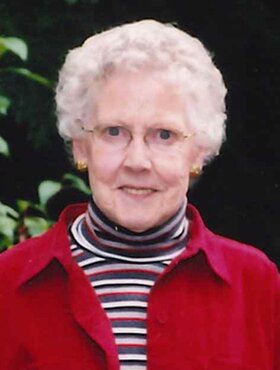 Please share a memory of Doreen to include in a keepsake book for family and friends.
View Tribute Book

Doreen Ritchie beloved wife of James Garnet Forbes Ritchie of Calgary, AB, passed away on Friday, February 18, 2022, at the age of 91 years.

Doreen was born at her parent’s farm near Pine Lake, Alberta along with her twin brother Donald on September 11, 1930. She often reflected on her abundant, happy memories growing up on the farm with her older siblings Eileen and Bill. The twins sounded like a handful. Their older brother and sister played important roles in supervision and upbringing, while parents William and Mary were busily building the family farm. One of Doreen’s earliest memories was going along in the stroller while her mother picked roots on newly cleared land. The Bagries moved to the Penhold farm in the early 40’s and although just a child, Doreen well remembered growing up during the “dirty thirties”. She lived her life with the work ethic and frugality created by those difficult times. She took great pride in her farm background, and like so many during that period, they were a close and supportive family.

Doreen was afforded, what was an uncommon benefit at that time, a High School education. She boarded in Red Deer, but always came home to the farm on weekends. She later trained in secretarial arts and moved to the big city of Calgary where she met her husband, Garnet. Doreen was the only Bagrie to marry, she and Garnet were wed in 1952, until death did they part when Garnet passed away on July 11, 2020. Doreen and Garnet started their family in 1958 at their little house on the outskirts of Calgary, in the neighborhood of Thorncliff, a new community of young families where their neighbors became lifelong friends. In 1964, Garnet’s job took them to Lloydminster, where many new friendships developed and happy times were enjoyed in the bowling alley, and particularly, the curling rink. For Doreen, curling was a passion which brought her pleasure until her dying day. They returned to Calgary in 1969 but did preserve their Lloyd friendships, which they both cherished always.

All along the way, Doreen epitomized the role of home economist. Her homemade bread was an occasional source of frustration for her, but her baking enthusiasm did fulfill her mission to make our house a home. Her pride and joy was her garden, and the food it produced, to the extent that she kept the rest of the family continually busy shelling peas, digging potatoes etc. Doreen may not have invented the practices of composting and recycling, but was at the very least, decades ahead of what would later become common practice. Nothing was ever wasted in her household! She often worked part time in an office administration capacity at everything from real estate to veterinary service, wherever a productive opportunity appeared. Her artistic hobbies and flower gardens will provide an enduring reminder of her industrious nature, and appreciation for the beauty and relevance of the natural world, as they hang in our halls and memories. Her hand knit sweaters and blankets will embrace us always.

Weekend camping trips, although a substantial organizational undertaking for Doreen, provided her the opportunity to enjoy her walks and the fresh mountain air she never failed to make mention of. Special bedtime camping treats always made even this small trailer a home. Her ambition to stay fit kept her walking around her neighborhood long after the camping trips ended.

Doreen and Garnet actively supported both of their children at all stages of life and were welcome and loving participants in the lives of their four grandchildren.