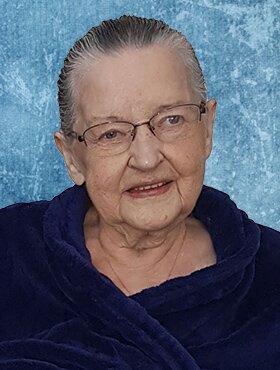 Please share a memory of Irene to include in a keepsake book for family and friends.
View Tribute Book

In 1968, Irene graduated from Nursing College in Vancouver B.C with a degree in Nursing. In 1983 she decided to change her career path and went to Humber College Institute of Technology, in Etobicoke, Ontario to be come a funeral director.

Irene nursed in Vancouver and Kamloops, British Columbia, as well as Thunder Bay, Ontario. When Irene became a funeral director, she settled in Fort Frances, Ontario and worked at Green’s Funeral Home until her retirement in 1987. After much convincing, Irene went to live with her daughter Bonnie McCarthy in Calgary, Alberta in 2006.

Irene enjoyed reading and loved all animals and liked to feed the birds, squirrels, and rabbits. She often spoke of growing up on the family homestead, even though there were many hardships and a great deal of hard work. Irene loved her family and had many fond memories and stories to share.

Irene is survived by her daughter, Bonnie McCarthy who lives in Calgary, AB. Her Son, Alan McCarthy, and daughter-in-law, Maria Rikic-McCarthy, as well as her granddaughter, Victoria McCarthy, and grandson, Raymond McCarthy, who all reside in Hamilton, ON. Her sister, Ella Bernie, and sister-in-law, Lucille Kaliska, who both reside in Rainy River, ON. As well as numerous nieces, nephews, cousins, and friends.

“When I come to the end of the road and the sun has set for me, I want no rites in a gloom filled room, why cry for a soul set free? Miss me a little, but not too long and not with your head bowed low. Remember the love that we all once shared. Miss me, but let me go, for this is a journey that we must all take, and each must go alone. It’s all a part of the master’s plan, a step on the road to home. When you are lonely and sick at heart, just go to some friends we know, and burying your sorrows in good deeds. Miss me but let me go”

Condolences, memories and photos may be shared and viewed at www.calgarycrematorium.com