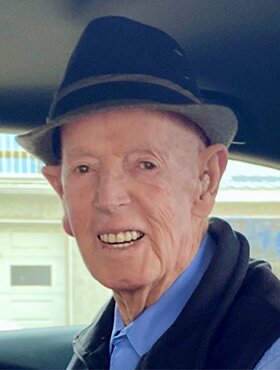 Please share a memory of David to include in a keepsake book for family and friends.
View Tribute Book

On January 2nd, 2022, Dave Polson passed away after a short and seemingly one-sided battle with cancer. There will a grand reunion in Heaven as anyone who reaches the age of 92 “1/2” has loved and lost many dear friends and cherished family members. The thought of his transition from this world to be with Jesus is of great comfort to those who loved him. Dave had a quiet, steady faith and was part of the Strathmore and Foothills Alliance families for years.

He was born on the family farm June 14th, 1929, in Consort, Alberta to Angus and Ada-Belle Polson and a doting big sister Maxine Schimpf. Despite growing up in the dirty 30’s, life was good on the farm.  It was there he discovered his first love, horses.

In 1946 Dave had polio which left him with permanent weakness, but it did not dampen his enthusiasm or ability to put in a hard day’s work.

Dave got his electricians ticket at SAIT in 1949 and started work for Farm Electric Services running power lines throughout central Alberta. In 1951, while driving down a rural road in Eckville, he spotted the back view of a red head carrying a bucket to the well on the school property.  Dave claimed it was love at first sight and returned to the schoolhouse that evening with a well-crafted excuse to talk with her. He claimed, “the front view was even better than the back”.  Dave invited the young teacher for an ice cream date on the spot. Dave and Shirley Barker were engaged by Christmas, married in 1952, and started creating their family and life together.

In 1956 Dave joined the City of Calgary as a power lineman. Today’s linemen would be surprised that the crews used to climb the poles, rain, blizzard or shine. They handled 33,000 volts with rubber gloves as safety gear. What a day when hydraulic buckets were introduced!

Dave continued to work as a lineman until 1963 when he and Shirley purchased a farm west of Strathmore. His love affair with horses continued and he began working on a rodeo intermission act. Dave was roman riding (standing with one foot on each back of a pair of horses) over small jumps. Perhaps he took a tumble but somehow, he determined this idea was not practical with four kids and a farm to pay for.

In 1974, Dave spotted another beauty on a rural road, this time east of Strathmore. On a property overlooking Eagle Lake, Dave and Shirley created Strathmore Tree Farms where Dave took pride in growing specimen Colorado blue spruce. Once they finished building their home, winters gave them time to explore new opportunities.

Dave volunteered in Bonaire for Trans World Radio, maintaining radio towers. Dave and Shirley had a unique take on their snowbird years and both spent some winters in Haiti serving missionaries by sharing the practical skills they each developed on the farm. Dave enjoyed training horses and marveled at their strength; much like the Haitian people.

Dave and Shirley retired in Calgary in 1988 where Shirley enjoyed winter sports. While Dave didn’t ski or snowshoe, he supported her summer activities and the occasional hike in the mountains. Shirley took up cycling and Dave spent years as her “roadie”, following behind her as she travelled every highway in Central Alberta. He seemed content following her in the van and once again, seeing the view that had captured his heart so many years ago.

Dave will be missed at his regular haunts at Chapters and several McDonald’s restaurants. He met different groups for coffee to discuss current events and days gone by. COVID put a hamper on Dave’s gatherings and he missed them. He especially got a kick out of the group who called themselves “The Think Tank”.

A small family service will be held at the Foothills Alliance Church. Interment at Queen’s Park Cemetary.

In memory of Dave, the family invites you to remember this quiet fellow by striking up a conversation with a stranger or sharing a Werther’s with someone who needs a lift. Condolences, memories and photos can also be shared and viewed here. Special thanks to the beautiful staff at the Dulcina Hospice.