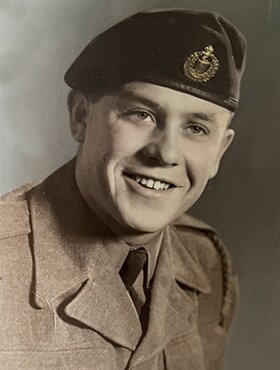 Please share a memory of Henry to include in a keepsake book for family and friends.
View Tribute Book

Henry Wyatt of Calgary Alberta, passed away peacefully at his home on January 2nd, 2022, at the age of 91 years.

Henry was born in Bellevue Alberta, Canada on Dec 6, 1930, and was the youngest of five boys. Henry moved to Stettler, AB and then eventually to Edmonton in 1949. He joined the army in 1950 and that would be his career for the next twenty-five years.

Henry, better known as "Cuddles," to his brothers in arms, was a veteran and member of the Lord Strathcona’s Horse (Royal Canadians). Henry fought in the Korean war, was honored by the Canadian Armed forces, and received the British Empire medal for bravery.

Henry met his wife of sixty-seven years, Marybeth (Black) when he moved to Calgary with the army in 1950. His wife was his life companion, travel partner and the love of his life. He was saddened after Marybeth lost her life after a long battle with cancer last January. Henry missed her every day.

Henry was a devoted father. He loved his children unconditionally and gave them an incredible life.  He was a hero to his children, grandchildren, and great-grandchildren. He will be missed and loved every day by everyone.

Henry was a man of few words, quite literally, and a man with nine lives, or was it nineteen? He was a simple man and followed routine to the letter each day. He would lay out his clothes, enjoy toast with cheese slices and made sure all the doors were locked in sequence before heading to bed. He loved going down for the mail and giving a "hey" and wave to everyone at his residence. He enjoyed visiting his friends, the Owens, and getting the latest regiment info from Joyce and Howie. Henry liked company but he loved his solitude. Henry was an extraordinary man that lived an extraordinary life.

There has been an outpouring of kindness and grace from Henry's friends. They say that he was a kind man with a full heart and an incredible smile and that he will be greatly missed. These have been comforting words each day as we pack up a legacy of two incredible people, we all loved so dearly, looked up to and will remember with joy in our hearts.

Henry was pre-deceased by his wife Marybeth, and is survived by his children, Kimberly, Karen and Donald, grandchildren, Christopher, Mikol, Jennifer, Jeremy and Lea and great-grandchildren, Matthew, Wyatt, Lachlan, Jack, Autumn, Holden and Nekoh.

A graveside service will be planned in spring or summer .Please forward condolences through www.calgarycrematorium.com. Condolences, memories, and photos can also be shared and viewed here.