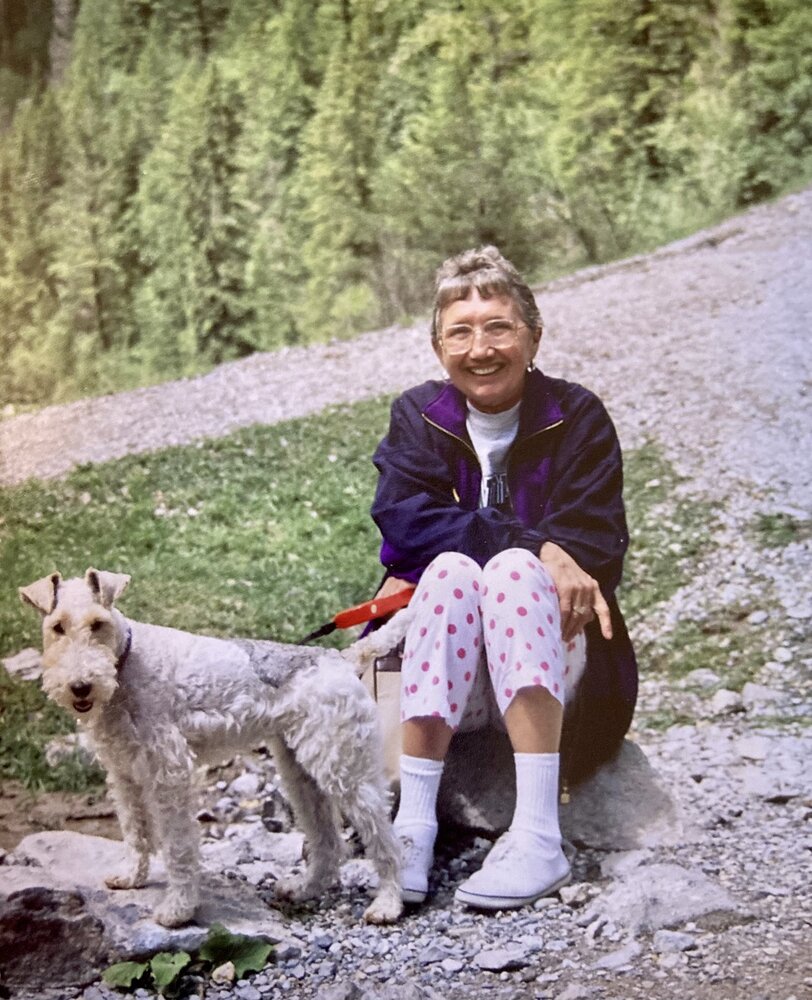 Please share a memory of Patricia to include in a keepsake book for family and friends.
View Tribute Book

We are very sad to announce the passing of our beloved wife, mother, and grandmother, Patricia (Pat) Smith, on Sunday, November 14, 2021.

Pat was born in Kirkbymoorside, Yorkshire, England on April 18, 1929. She enjoyed her early school years growing up in rural North England with her cousins and family. A hard worker, Pat started working at just fourteen years old and in 1947 she joined the Women’s Royal Naval Service (also known as the Wrens) as a stenographer. It was here that Pat made many lifelong friends and she loved to tell stories of her adventures in the service. One evening, while stationed in Portsmouth, England, Pat and her friends attended a dance at the naval base service club. It was here she met a young James (Jim) Smith, or Jock as he was known at the time. Jim was a Scottish sailor fresh off a patrol of the African coast who asked her for a dance. From that night, their romance blossomed and the two were married in 1950. The newlyweds lived together in Kirkbymoorside where Jim helped run the local pub and worked for the postal service. Two baby boys joined the family, Andrew in 1954 and Paul in 1956, both delivered at home with the help of a midwife.

With opportunities in post-war England lacking, the family made the decision to immigrate to Canada. Jim went to Canada first in March of 1957 while Pat, her mother (Agnes), and the two young boys following one month later. After an arduous trip by ocean liner and rail via New York the family was reunited with Jim and they made their home in North Calgary. Pat found employment as a stenographer with numerous Calgary firms before moving into a rewarding post at the Christine Meikle School as an administrative assistant. She stayed in the Calgary Public School System as a library assistant at George P. Vanier Junior High for many years until her retirement in 1977. In her retirement years Pat and Jim travelled extensively returning to England and Scotland several times and also enjoyed cruises to many distant ports of call.  They especially enjoyed Puerto Vallarta, Mexico returning there many times. The two were fortunate to spend extensive time with family in the Canadian Rockies, with Lac des Arcs in particular, holding a special place in their hearts.

Pat was a gentle and caring person. She had a deep love of dogs, she owned and spoiled many furry friends in her 92 years.  She was a superb cook and a fantastic baker. Her Sunday and Christmas dinners were legendary. She always had a plate of cookies or banana bread on hand for visitors, especially the young friends from the neighbourhood Andrew and Paul collected over the years. Pat was an avid gardener, and she kept her yard filled with colourful flowerbeds and an impressive vegetable garden. The apple and peach trees were a wonderful addition welcomed by the family because it meant delicious pies for everyone.

Family was important to Pat. She loved her boys and was a proud grandmother. She spent a lot of time with her grandchildren, she enjoyed teaching her grandchildren to read and helping them to learn their colors using the flowers in her greenhouse. In the latter years of her life Pat faced many health challenges with grace and courage. She always had a smile and a hug for her family, her friends, and her care givers. Our family is grateful for her many caretakers at the George Boyack Care West centre where she spent her last few years.

Pat is survived by Jim her husband of 71 years, her two sons, Andrew (Paddy), and Paul (Emily); along with her three beloved grandchildren, Carly, Brendan (Agi) and Gillian (Brendan).

A small, Private Celebration will be taking place with close family and friends on Saturday, November 20, 2021. If friends so desire, memorial tributes may be made in her name to the Calgary Humane Society via telephone (403-723-6000) or online www.calgaryhumane.ca .