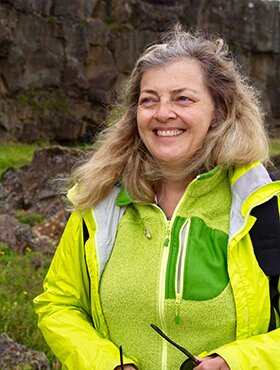 Please share a memory of Anne to include in a keepsake book for family and friends.
View Tribute Book

It is with heavy hearts that we announce the passing of Anne Hargreaves, beloved wife of Dave, mother of daughters Holly (Troy) and Stephanie, and grandmother of Rowan, on November 10, 2021.

Anne was born on January 8, 1960 in Calgary, AB to Royal Flury of Medicine Hat, AB & Solomon Flury of Au, Saas, Switzerland. She grew up in the Charleswood area, attended local schools and made many fond memories of time spent with the neighbourhood kids who became some of her closest friends. Smart and quick-witted, Anne excelled in school which enabled her to skip a grade and finish high school early. Opting to take a gap year rather than attend university immediately, Anne travelled to Peru, exploring the country with the guidance of her cousins. This trip marked the beginning of her lifelong love of travel. Anne loved the mountains, geology and nature. She attended the University of Calgary from 1978-1982, graduating with a BSc in Geology and a minor in Spanish. She often talked about field school and the many adventures she and her classmates and mentors had during that time. After graduation, she began working as a contract geologist at the Geological Survey of Canada. In 1985, she met and fell in love with an Englishman named Dave with whom she shared a love for the outdoors. They got married in 1986 and their first daughter, Holly, was born in 1987. Their second daughter, Stephanie, was born in 1990. Anne spent these early years at home with her daughters and volunteered at their schools, with their sports teams and musical extracurriculars. Summers with her young family were spent hiking and camping in Alberta and British Columbia – a favourite place being Kokanee Creek Provincial Park near Nelson, BC – and winters were spent on the ski slopes. Anne was an avid skier and even took up snowboarding in her late 30s.

From 2005 – 2014, Anne was Vice-President of a small oil & gas data company and enjoyed success in her career. In these years and the ones that followed, Anne, Dave and her daughters travelled the world. Highlights included exploring the English countryside where her husband, Dave, grew up; driving up the windy mountain roads of the Himalayas in India; cruising down the Mekong river in Vietnam; spending New Years at the Opera House in Sydney, Australia; road tripping across North America; and celebrating her daughter and son-in-law’s wedding in Wellington, New Zealand. In 2014, with the full support of her family, Anne left Calgary for Halifax, NS to pursue her Master’s Degree in Earth Sciences at Dalhousie University. There she made many new friends and attended field trips in Trinidad, Iceland and Norway. After a long journey, she finally graduated with her MSc in June 2021.

Anne believed in experiencing life to the fullest each day. She wasn’t one to wait for the perfect circumstances to begin really living. She was immensely proud of her daughters and loved her Canadian-kiwi granddaughter, Rowan, to pieces and cherished every moment spent with her. Although the last few years of Anne’s life were very challenging due to a diagnosis of ALS, she lived with bravery and positivity. Anne’s family would like to express sincere thanks and appreciation to Marzena Lamperska, Kristina Rendell, the ALS Society of Alberta, the ALS Clinic at South Health Campus, the Rockyview ICU team, and EMS paramedics, all of whom exemplified professionalism and care for both Anne and her family.

A celebration of life for Anne has been postponed to a later date. If you are planning on attending, please RSVP to celebrationforanne@gmail.com. In lieu of flowers, the family asks that you consider making a donation to the ALS Society of Alberta (https://www.alsab.ca) whose mission is to make each day the best possible day for people living with and affected by ALS.

Anne will always be loved and remembered.