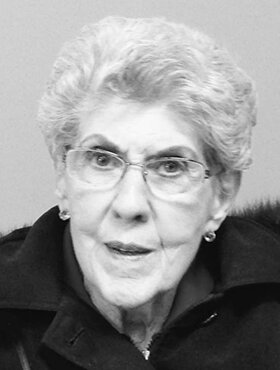 Please share a memory of Marion to include in a keepsake book for family and friends.
View Tribute Book

Marion Zimmerman (nee Hollister) beloved wife of Edwin Zimmerman of Calgary, AB passed away on Saturday, November 6, 2021, at the age of 87 years.

Marion was born in Vulcan, AB, Canada on November 25, 1933, to Rosco and Elsie Hollister.

In 1951, Marion followed her family to Seattle when her father went to teach at Puget Sound College of the Bible with C.H. Phillips. She worked as a secretary for life insurance companies. Marion married Edwin Zimmerman June 30, 1956. Together they moved to Lincoln Illinois for Edwin to pursue further education and preached at Boyd for nearly five years. They then moved to Covington, Indiana and ministered at West Liberty nearly five years. All three boys were born in Illinois. The family returned to Calgary in 1967 where they resided until her death.

Marion suffered serious health problems beginning in June 2021, which continued and escalated until her passing.

Marion enjoyed her flower garden and loved her family and grandchildren.

Marion was predeceased by her parents, Rosco and Elsie Hollister and in-laws Curly and Elsie Zimmerman.

A private memorial will be held at Calgary Church of Christ, 4030 Maryvale Dr. N.E. on Saturday, November 20, 2021, 11:00 am which will be livestreamed.   Access to the livestream can be found at calgarycofc.com. Condolences, memories and photos can be shared and viewed here.