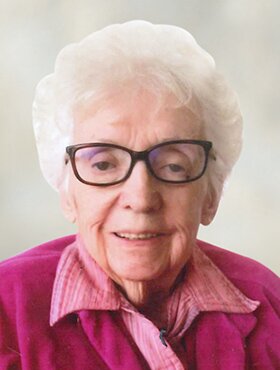 Please share a memory of Bernie to include in a keepsake book for family and friends.
View Tribute Book

It is with great sadness we announce the passing of Bernie Bruneau. She was born in the French community of Willow Bunch, SK in 1928. She passed away Wednesday, October 13, 2021, in Calgary at the age of 93.

Bernie graduated in the late forties and eventually left Willow Bunch in the fifties. In the sixties she made Calgary her final home. After thirty-five plus years with AGT she retired in 1993.

Bernie was a great entrepreneur. She had continued her career with AGT while managing and caretaking a twelve-suite apartment building.  She used her banking skills wisely to purchase a half duplex and within a couple years was the owner of both halves. A tremendous accomplishment for a single woman in the 1970’s.

She loved decorating her home and yard. She had a meticulous yard. A beautiful pink flower extravaganza in the summer and a huge Christmas display in winter. These captured everyone’s interest and she enjoyed tremendous compliments from family, friends, and strangers alike.  A job well done! Auntie will be dearly missed. May she Rest in Peace until we meet again.

Bernie is survived by her youngest sibling Rachelle Delorme of Manitoba.

She was predeceased by her parents, Euclide and Elisabeth Bruneau; sisters, Jeanne d’Arc Lalonde, Gibby Marcil, half sister Yvonne Thorhaug, and half brother Adrien Bruneau. She also lost brothers, Robert, Fernand, Bruno, and Anatole as children.  She will be lovingly remembered by all who knew this beautiful woman. Please forward condolences through www.calgarycrematorium.com