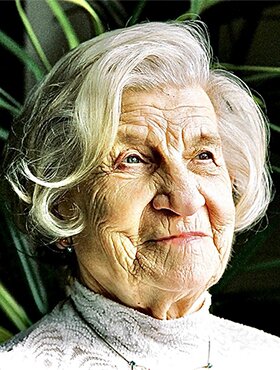 Please share a memory of Helen to include in a keepsake book for family and friends.
View Tribute Book

With profound sadness, we announce the passing of Helen Milan (nee Bandura), 93, of Calgary, AB on October 9, 2021. After her heroic struggle with Alzheimer’s, Helen succumbed to Covid.

Helen was born January 6, 1928, in Brosseau, AB, the fourth of nine children born to Mike Bandura and Mary Fedoruk. She grew up on the family dairy farm, where she developed a strong work ethic and a deep love of animals.

Helen participated in a fundraiser for the Trochu Hockey team and upon selling the most tickets, she was awarded the title of “Two Hills Hockey Carnival Queen”, complete with a full-length robe and crown. Helen also became a RCMP Police Matron, who would ride along with the RCMP to Calgary, should they need to put a woman in custody.

A year later she moved to Calgary, AB, where she worked as a cashier at The Hudson Bay’s grocery department and as a waitress at Dell’s Dairy Bar. In the evenings, she worked on a night course in comptometers (a mathematical machine used before calculators were invented).

Helen moved to Trochu in 1948, where she was employed as a bookkeeper for Frere’s Garage and Implements. Helen spoke fondly of her years at Frere’s and of the trust that John Frere placed in her at the young age of 20 to manage the shop when he was away. The Frere’s also encouraged Helen to attend Catholic Services and sponsored her into the church. Frere’s was where she met her future husband, Lawrence Milan, when he brought in a vehicle for repairs. The two started dating after attending a family wedding.

Helen and Lawrence married on June 20, 1951, in Trochu, AB. For the first six months, Helen continued to work at Frere’s in Trochu and Lawrence would visit her on weekends. During the week he worked in the mountains as a heavy equipment operator with his brother. In December that same year, Helen and Lawrence moved to Bowness, AB, which at that time was a small town outside of Calgary. It was there they bought their first home, a small one-bedroom, which they added onto over the years.

Over the next 10 years Helen and Lawrence would have eight daughters. Helen tended to the care of her girls, cultivated and nurtured a huge garden and managed the household while Lawrence worked long hours, often out-of-town for months. Helen spent many nights sewing and embroidering outfits or crocheting and knitting sweaters for her girls and knitting socks for Lawrence. Despite the long nights, Helen would be awake before sunrise so she could fill the house with the smell of fresh baked bread, cinnamon buns and fritters! Her nanaimo bars, butter tarts, shortbread cookies and angel food cakes were often raided from the freezer.

Then there was the petahe (perogies)!! This all-day event involved all family members and needed every square inch of the kitchen to make the filling, roll the dough, pinch the edges, par-boil, bag and freeze hundreds of dozens of hand-formed and pinched petahe. These family favorites were served with bacon, fresh dill and sour cream.

As the family grew, space became tight in their Bowness home, so Helen, Lawrence and their daughters embarked upon adding rooms and developing the dugout basement into livable space – Helen’s Mother’s Day wish!

Once all the girls were in school, Helen worked part time as a bookkeeper for Grant Jarmen, Chartered Accountant. Around 1968 she worked as a bookkeeper for Maestro Music and then for other Robinson family businesses. Her increasing responsibilities encouraged her to expand her accounting expertise, and in her mid-forties Helen enrolled in courses in Registered Industrial Accounting at The University of Calgary.

In 1970, needing more space – and bathrooms – the family moved to Lakeview in Calgary, to continue raising their family.

Never afraid of hard work and learning, Helen completed Macroeconomics (1973) and Microeconomics (1974) at Mount Royal College. Then in 1976, at the age of forty-eight, Helen successfully wrote her Real Estate exam to become a licenced realtor.

From 1976 to 1988 she made her mark working with Melton’s, LePage Melton, A.E. Lepage and Royal Lepage. Her unassuming demeanor and honest opinions earned her respect in the industry, especially with her clients! Several banks trusted Helen to handle their executive transfers into the city.

Helen received multiple awards for her impressive accomplishments during her Real Estate career:

Helen was a member of the Catholic Women’s League (CWL) at Assumption Church. She was a lucky bingo player and loved garage sales and puzzles, as well as the occasional casino.

Helen was a particularly good bowler, playing with ladies from the Mountain View Bowling Center. Later she took up golf, which she became exceptionally good at, enjoying games with her sons-in-law, through work tournaments and outings with Lawrence. Helen eventually joined the Shaganappi Golf Club, playing nine holes with the ladies in the morning and then playing 18 holes with the men in the afternoon of the same day for a challenge. In 1996, she won the Gary Vak memorial trophy with Low Net handicap.

Of all the activities Helen participated in, her favorite was to share a meal, play cards or board games, or build puzzles with her girls, sons-in-law, and grandchildren.

In 1988 Helen joined Lawrence in retirement. Their adventures started by driving their trailer across Canada to Alaska and into the United States, with extended stays in California and Florida. They enjoyed many international trips travels which included Hawaii, a Caribbean Cruise (Haiti, Dominica Republic, St. Maarten’s and Antigua), Jamaica, Bermuda, Bahamas, Costa Rica, Nicaragua, Thailand, Singapore and Malaysia. Helen shared her success in real estate with her family by ensuring each daughter attended one memorable vacation with her and Lawrence.

Helen started showing significant signs of Alzheimer’s Disease in 2010. After some time in the hospital, she came to reside at Prince of Peace–Manor, where she lived until 2015. Helen’s Alzheimer’s began to progress and shortly after Helen and Lawrence’s anniversary in June of that year, Helen wandered from the Manor looking for Lawrence, who had sadly passed away in April that year. Following a short stay in hospital after a broken hip, she was fortunate enough to return to Prince of Peace–Harbour, where “Mama Helen” continued to receive exceptional care, and where she remained until her passing.

Our mother Helen always encouraged us to be strong, as set by her own example. Perhaps she knew we would need that strength to be able to bear losing her – our Mother, Grandma (Baba) and Great Grandma (Baba Grandma) – who was and will remain deeply loved.

She was predeceased by Lawrence Milan, her loving husband of sixty-four years, Shari Byrgesen, her granddaughter, and five siblings.

Helen’s family is eternally grateful to the entire staff at Prince of Peace–Harbour for the abundance of care, compassion and love they gave Mom/Grandma (Baba)/Great Grandma (Baba Grandma).

In lieu of flowers, donations may be made in the name of Helen Milan directly to Prince of Peace–Harbour, 285030 Luther Rose Boulevard, Calgary, AB, T1X 1M9 or by contacting them directly at gm.pop@verveseniorliving.com or to The Alzheimer Society of Calgary, 800, 7015 Macleod Trail S.W., Calgary, AB T2H 2K6, (403)290-0110, www.alzheimercalgary.com.

A private funeral service will be held, on Friday, October 15, 2021 at 11 a.m. Family and friends are invited to join Helen Milan’s live stream service, the link to be posted here. For those unable to view live, a recording of the service will be posted on this website.