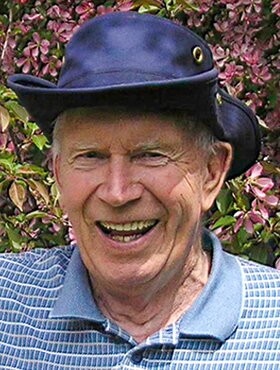 Please share a memory of Kenneth to include in a keepsake book for family and friends.
View Tribute Book

Ken Wilson, beloved husband of Roxy Wilson of Calgary, AB, passed away peacefully in Chinook Hospice on Friday September 24, 2021, at the age of 92 years.

Ken was raised on the family farm in Gilbert Plains, Manitoba and quickly discovered all things of nature, sports, hunting, fishing, gardening, and family which were never far from his heart.  As a young man, Ken aspired to be a farmer and set about acquiring farmlands in the Gilbert Plains area. Winters were spent working in a local sawmill, and then working as a cat skinner for road construction in the Banff and Lake Louise area. The farming was put on hold when he met his soul mate, Roxy in Canmore, Alberta. Ken and Roxy were married June 1, 1957 and were blessed with 64 years of coupleship.

Ken joined Calgary Police Services in 1957 and progressed from “foot patrol” to “cars” to detective with over 31 years service. He made lifelong friends in the Police Service and often remarked how privileged and honoured he was to work with such professional and knowledgeable colleagues.

He was a keen bird and deer hunter throughout his life and harvested his last deer at the age of 88. Ken was very proud to have taught many young men including his son Cam the field craft of game hunting. Birds were a lifelong interest from hunting, birding the backyard, and the local sloughs. When Cindy and Cam were younger, they could be found on car rides with Dad to lakes, sloughs, and roadsides to discover and learn about waterfowl, game birds, owls, raptors, and the beauty of wildflowers.

Ken was a passionate supporter of both his children’s and grandchildren’s activities and was often seen at the swimming pool, curling rink, skating rink, ski hills, or football grounds. Roxy and Ken skied and curled throughout their years, and Ken was an enthusiastic golfer after he retired.

The family would like to thank the caregivers and staff of the Chinook Hospice for the care compassion provided to Ken and the family.

Due to Covid restrictions, a celebration of life will be held for immediate family to pay our respects.