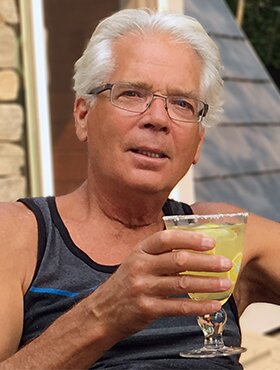 On Monday, August 30th, 2021, we said a final goodbye to a remarkable man who touched many lives. After a short but valiant battle with Creutzfeldt-Jakob (Prion) Disease, Darryl passed in Shelley’s arms surrounded by the love of his family.

Darryl began his career in the elevator industry as a summer job while studying engineering, and never looked back.  He started as a helper, got his ticket, and later opened the operations for Fujitec Canada in Alberta in 1999.  Under his guidance, the Calgary operation proved to be the most successful branch in North America every year until his retirement at the age of 68 in 2017.  He was a mentor to many, and a trusted voice who valued honesty and hard work.

Darryl was always a fit and active guy. In the winter, he spent his leisure time skiing, vacationing, and windsurfing with his family in many exotic places. Summers always included an annual trip to the Gorge with the windsurfing gang and weekends at the cabin in Sylvan Lake.

A favourite was a yearly trip to Cabarete, Dominican Republic with Jill and family and his many friends. Windsurfing, beach walking, family adventures and happy hour were always high on the fun scale.

After retirement, together with Shelley, he undertook a huge renovation at their Sylvan Lake cabin. First built by his family in 1962, the cabin was very close to his heart. With hard work and grit, Shelley and Darryl upgraded their special place these past few years to be their forever home. His ingenuity, creativity and attention to detail can be seen in every corner of his most rewarding project. You can feel the love he put into the cabin - and his presence is felt everywhere.  Until his passing, it had become their happy place, sharing summers with family and friends.

Darryl’s love for Shelley was profound. Their love story is admired by all who had the privilege to know them. Darryl never failed to tell her how much she meant to him. They were best friends, and he was her rock. He wore the joy and pride of his children, their spouses, and his grandchildren on his sleeve. His love of wind sports, tinkering in the garage, creative problem solving and zest for life were just a few of the many valuable lessons he passed on to his grandkids.

He will be forever missed by his family, his windsurfing gang, lake neighbours, work colleagues and longtime friends.  For Darryl, a great day was one spent on the water, hanging with family and friends, enjoying a black russian - or a margarita - and laughs in the hot tub.

In lieu of flowers or gifts, donations may be made in tribute to Darryl’s life. The Alberta Prion Research Institute has collaborated with the Alzheimer’s Society of Alberta & Northwest Territories to support research on Prion Disease.  You may make your donation directly to Prion Disease research in the notes section of the donation page, at tinyurl.com/darrylcervi

As per Darryl’s wishes, there will not be a formal funeral, but the family intends to arrange a celebration of his life at a later date when restrictions ease. Communication will be through Facebook, WhatsApp or the Calgary Fujitec office.