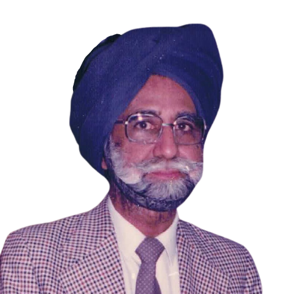 Sardar Santokh Singh, beloved husband of Sardarni Surjit Kaur, left for his heavenly abode on Thursday, August 26th, 2021, at the age of 86 years in Calgary, Canada. He continued to be strong and courageous till the end of his battle against colon cancer.

Santokh was born in the city of Sukkur Rohri in Sind province, Undivided India on October 16th, 1934. Santokh was the oldest of two siblings and son to Sardar Wadhawa Singh and Sardarni Kesar Kaur. During the partition of 1947, at the age of 13 years, Santokh and his family moved to the city of Ghaziabad in India, leaving behind their ancestral home in present Pakistan.

Santokh was an intelligent and an enterprising young man; he achieved a technical diploma in Mechanical and Electrical Engineering from the Government Technical Institute in Jhansi, India in 1955. He worked all over India spanning four decades, from Bombay to Kumardhubi, Asansol, Bangalore, Faridabad, Bhiwani, and ended his career at Jalandhar. He was a diligent, honest, committed, and talented man who worked hard and scaled his companies’ successes to greater heights. His exemplary commitment towards his endeavors are his legacy that will be treasured by all he knew.

Santokh got married to Surjit on 13th May 1957 following Sikh tradition. His undying love towards his first-born daughter and his two sons was reflected in everything that he did. He never missed an occasion to celebrate their accomplishments and achievements. Santokh valued education and ensured that his three children were given the best schooling, sparing no expense. He enjoyed guiding his grandchildren, especially his granddaughter who spent her early childhood years with him and later cared for him in the latter part of his life. He valued his relationship with his predeceased younger brother, Gurdayal Singh.

Santokh was a pious and religious Sikh man who strongly believed and lived by the tenets of Sikhism (Naam Japo, Kirat Karo, Vand Chakko) – meditation upon and devotion to the creator, truthful and honest living, and service to humanity. He recited scriptures daily from the holy book Sri Guru Granth Sahibji. He earned an honest living. He was always generous towards those less fortunate than him, giving whenever he could. He instilled the same spiritual beliefs in his children. Family vacations always included a visit to Sikh Takhts (Gurudwaras).

Santokh was disciplined in his everyday life and a man of simple means. He was a pure vegetarian who had a sweet tooth. He developed a love for lawn tennis and actively played for a number of years. Family time included watching Wimbledon Championship, Cricket matches and other major sports events. His love for sports fostered the same in his children.

Though Santokh was fighting his own battle with cancer, his commitment towards his ailing wife, with dementia, was commendable. His friends and care aides from C3 Beddington remember him as a kind and loving person. He always made them feel welcome in his home, asked about their family, and offered food and refreshments. He always saw only the good in people and had a very positive attitude towards life.

Santokh is survived by his loving wife Surjit Kaur, married for 64 years, his daughter Davindar Bhatia and son-in-law Harvinder Singh Bhatia, his older son Ishpal Singh Panesar and daughter-in-law Neelu Panesar, younger son Iqbal Singh Panesar and daughter-in-law Sandip Kaur Panesar, and six grandchildren Gurjyot, Simran, Jasmeen, Paramjyot, Mantej, and Aman, who will always remember him fondly. He is also survived by his sister-in-law Amarjit Kaur and two nephews Baljit Singh and Jaspal Singh who were like his own sons.

Funeral Services will be held at Calgary Crematorium Chapel, 3219 – 4th Street NW, (within the valley of Queen’s Park Cemetery) on Saturday, September 4th, 2021, at 2:00 p.m. Final Prayer Service and Langar will be held at the Sikh Gurdwara following the Funeral Service located at 739 81st Street SW, Calgary, Alberta.