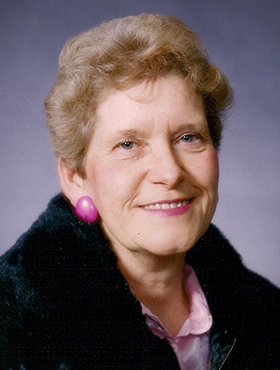 Grace Weathered beloved wife of John Weathered of Calgary, passed away on Saturday, May 29, 2021 at the age of 85 years.

She was born in Athabasca, Alberta on July 4, 1935 to Ethel (nee Baker) and John (Jack) Whieldon.

Grace grew up on a grain and livestock farm near Perryvale, AB where her love of horses and gardening blossomed. Grace completed her Nurse’s Aide certification in Nov 1955 and worked in Taber, and Camrose, AB while in her training. Once she was certified, she worked in the maternity ward at the University Hospital in Edmonton until 1962.

She married the love of her life John Arthur Weathered on July 5, 1958.  They lived in Edmonton and Calgary where they raised their children until they moved to the Weathered family farm in Saskatchewan. Grace and John moved to Marcelin, SK in 1971 where they built a beautiful house on the farm, and farmed for 28 years. In addition to raising their five children and helping with her seven grandchildren, Grace thoroughly enjoyed her “0.2 acre” garden, and her life on the farm toiling in her garden.

In Marcelin, Grace returned to school and completed her GED, and then she went on to complete her Licenced Practical Nurse training and certification in 1988. She worked at the Edmonton General Hospital, along with a few other area nursing homes until 1996. She then went on to work in Saskatoon at a long-term care facility until 1998.

Grace was a loving devoted wife and mother. She always sought opportunities to help others by sharing the fruits of her labour from her garden with all of their friends and family in the surrounding area. Grace loved having all the grandkids     out to the farm and fed them all the farm fresh veggies she could get them to eat, and sent them home with all the farm fresh veggies and canned goods they could carry. If it was summer you could always count on Grace to go picking berries of any kind, anywhere, and at the drop of a hat, if someone found a good patch, regardless if the bears had found the spot too. In the winter Grace loved to go curling, to play cards, go snowmobiling, and cross-country skiing. She accumulated many wonderful life-long friends in the farming community, and in the cities they lived, and in the Health Care Facilities that she worked. All of her patients had kind and wonderful things to say about her care.

In 1998 Grace and John sold the family farm and moved to St Albert, AB where they built a beautiful home. They began their love of RVing and had many wonderful adventures across Canada and the USA.  In 2000 they travelled to Alaska with their RV and panned for gold.

In 2005 they moved to Saanichton, BC. They were avid RVers and made many trips on the ferry with the RV to travel all across Canada and the USA visiting family and friends. In Sannichton they joined the local legion, and had a wonderful time social dancing.

In 2011, Grace and John moved to Abbotsford, BC. Here they renewed their love of Square Dancing, and joined three local Square-dancing clubs. They also continued on their adventures in RVing across Canada.

In 2017, Grace and John moved to Calgary to be near family. She continued to pick berries with family and friends. Grace had an amazing green thumb, and always had a lovely area of plants and flowers in her home.

Grace was very active until her early 80’s before she moved into the Newport Harbour Care Centre. In Newport Harbour, Grace received compassionate and kind care from all the staff.

Grace was predeceased by her father, mother, fifteen brothers and sisters; her son Jerry and daughter Ava.

A Private Celebration of Life will be held when it is safe to do so.