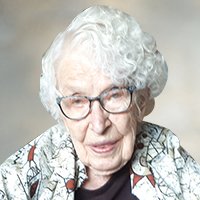 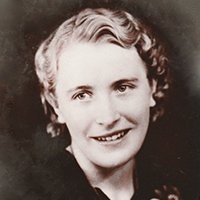 A Private Funeral Service will be held on Sunday, May 23, 2021 at 1:00 p.m. Family and friends are invited to join Mrs. Merceda Schmidt’s service streamed live (see below) on the day of the service. For those who are unable to view live, a recording of the service will be posted. Condolences, memories and photos can also be shared and viewed here.

To view the live stream of the service, please visit:

Merceda Schmidt, beloved wife of the late Donald Schmidt of Calgary, passed away peacefully on May 12, 2021 at the age of 104 years.  She was born in New London, Wisconsin April 12, 1917 to Rev. John Lucht, D.D. and Lynda Tech. She grew up in Kelstern, Morse, Leader and MacNutt, Saskatchewan. After attending high school in Yorkton, and normal school in Regina, Saskatchewan she began the "exciting years” (her words) of teaching 40 students in Grades 1-8 in homeland school and supervising correspondence students in Grades 9 and 10 on Saturdays. From 1940-1942 she taught at Bethany Lutheran School in Kenosha, Wisconsin where she was offered lessons on their new pipe organ which led to her years of "exciting organ experiences”  and began her love for playing the organ.

Merceda was married to Don Schmidt on December 25, 1942 in Winnipeg, Manitoba. His Air Force duties took them to Toronto and Victoria. Returning to Winnipeg, Merceda spent time substitute teaching where she enjoyed teaching Kindergarten because they had pianos in every classroom. She obtained her Kindergarten Certificate through summer school and helped develop a Kindergarten Curriculum.

After Merceda and Don moved to Yorkton in 1967, she became involved in all areas of preschool education. In the early 1970s she had the opportunity to spend several months in Infant Schools in England which fuelled her passion for providing meaningful learning experiences. Her contributions varied widely: from starting the Yorkton Nursery School Association in September,1974 to providing “Kindergarten for Parents” workshops sponsored  by the Department of Education at night classes.

Merceda was an active member at Zion Lutheran Church in Yorkton where she worked with the junior and senior choirs and enjoyed taking her children’s choir to nursing homes. She also was involved in teaching Sunday school, summer camps, Boy Scouts and Girl Guides.

Another move brought them to Calgary, Alberta in 1982 where both Merceda and her husband Don were active volunteers.  At Bethany Care Centre where Merceda's parents John and Lynda Lucht were residing, Merceda played the organ for sing-a-longs in the courtyard on Saturday afternoons, with Don handing out the books to residents.  On Sundays she played for church services and regularly played the piano in the Alzheimer’s Unit. They volunteered in their grandchildren’s classes at St. Clements School and when their grandson attended Mayland Heights School they helped in the library.  At the age of 80 Merceda began taking piano lessons from a teacher she met at the school. Merceda was a joy and inspiration for all the young students at the yearly piano recitals.

After moving to an apartment near the University of Calgary,  (enabling their two grandchildren to live with them while attending University) Merceda continued to be involved at Bethany (receiving her 25 year pin) but also spent mornings volunteering at the University of Calgary Day Care Centre for 15 years. When a hospital stay for a broken hip prevented Merceda from taking the bus to volunteer at Bethany she became involved in playing for hymn sings and sing-a-longs at Boardwalk and at Foothills Manor as well as volunteering at Foothills Lutheran Church Preschool, Sunday school and Vacation Bible School. Her grandson recalls her staying up until midnight preparing crafts, music and lessons and getting up at 7:00 am to make breakfast and get to day care. She also enjoyed playing the organ at Foothills Lutheran Church occasionally and taking part in their “Silver Saints” meetings and Lutheran Women’s Missionary League. She had a sound faith and trust in her Lord and Saviour. She confided, “When I get up in the morning, as I dash around, this hymn I learned as a child is guiding me”:

With the Lord begin your task; Jesus will direct it

For His aid and counsel ask; Jesus will perfect it.

Every morn with Jesus rise, and when day is ended,

In His name then close your eyes; be to Him commended.

Merceda was blessed with boundless energy. Always looking for another challenge, she was well into her 90’s when she began learning Bible passages in Greek. She is an inspiration to many. Countless children she taught over the years from all the different places would seek her out as adults and visit her, sending her cards, letters and keeping in touch. Her grandkids will remember her as a vibrant, active grandma impressing everyone by tubing behind a motor boat at ninety calling “Faster” to the driver, and taking rides on a horse and quads until late into her nineties at Family Reunions. She was proud of her children’s and grandchildren’s accomplishments.

A Private Funeral Service will be held on Sunday, May 23, 2021 at 1:00 p.m. Family and friends are invited to join Mrs. Merceda Schmidt’s service streamed live (see below) on the day of the service. For those who are unable to view live, a recording of the service will be posted. Condolences, memories and photos can also be shared and viewed here.

To view the live stream of the service, please visit:

To send flowers to the family or plant a tree in memory of Merceda SCHMIDT, please visit Tribute Store
Sunday
23
May