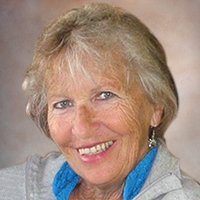 After her gallant battle with cancer, we lost a beautiful soul on May 1, 2021.  During her final struggle, Sharon was at home with her husband of 31 years, Jim Wood, who cared for her during her final days and who she referred to as her “guardian angel”.

Sharon was the first born to excited parents Mary and Bill Faas on October 20, 1947.  Bill and Mary lived in a small apartment in Bridgeland.  At the time they did not own a car.  When Mary phoned Bill at the Burns Packing Plant and said she was in labour, he ran all the way home.

Sharon loved school and set the bar high for her sister and brother.  She was an ‘A’ student from Grade One!

The family moved to Brentwood in 1963, into a brand-new house!

Sharon worked part time while attending the University of Calgary, including a stint at a camera store in Banff, and as she often said, in spite of not knowing anything about cameras. After four years at the U of C, she graduated with a Bachelor’s degree in Education, in 1971.

During her teaching career, Sharon taught most grades and most subjects in schools throughout Calgary.  She retired in 2002.  She loved teaching and her students.

Life took a beautiful turn for Sharon when she gave birth to her son Brett (Decarie), in May 1982.  She was a devoted and caring mom to a son she absolutely adored.

Sharon was thrilled to see Brett so happy as he married Cassidy (nee Payne) in July 2012.  And just when Sharon thought life couldn’t get much better, Brett and Cassidy gave her a granddaughter, Adison Mary, on October 18, 2015, two days before Sharon’s birthday.

Sharon was born happy and always had a positive attitude.  She loved life and especially loved her family.  Favourite times were playing a card game called 31 (the rules of which often eluded her), having a glass of wine at ‘happy hour’, and family meals (often the last to leave the table).

She loved travelling to Puerto Vallarta, Mexico, which she did many times over the years with Jim.  They made many great friends there and wonderful memories.   Sharon and Jim also spent some winters in Yuma, Arizona, where they enjoyed desert picnics, long walks, and pickleball.

Anyone who knew Sharon, knew how much she enjoyed watching baseball – first when Brett played Little League, then later the Toronto Blue Jays.

Special thanks go to Sharon’s Palliative Care Team.  Donna’s guidance was instrumental in ensuring Sharon had the support she needed.  Lana was Sharon’s nurse – her care and compassion exceeded what words can convey.  In short, she took care of Sharon.

We will miss Sharon’s smiling face and kind heart.  Until we meet again!