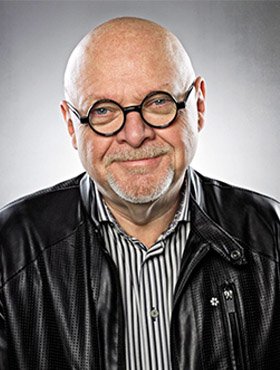 Bob was born and raised in Winnipeg. His love of music started at a very early age. When he was seven years old he joined the Winnipeg Boys’ Choir under the tutelage and deep friendship of Helga Anderson. He continued to sing throughout his youth and as a young adult, performing as a Baritone, and was the recipient of the Winnipeg Music Festival Rose Bowl Award in 1980.

After switching to the administrative side of the arts, Bob quickly earned a reputation as a true arts leader. His work career included roles at Royal Winnipeg Ballet, Calgary Philharmonic Orchestra, Orchestra London, and Edmonton Symphony Orchestra where he spearheaded the creation of the state-of-the-art Winspear Centre. In 1998 Bob became General Director of Calgary Opera, where he led the company to become a leader in commissioning new Canadian operas, launched an emerging artist program, and started a new outdoor summer opera festival. In 2016 he confirmed a partnership with Calgary Stampede that set Calgary Opera on a path to creating a new opera centre as part of the Stampede’s Youth Arts Campus.

In a multitude of tributes that have been posted, many colleagues have expressed Bob’s impact on their lives and their careers as profound, and describe Bob as a visionary, a true leader, a mentor, a force of nature, a giant, an icon, a shaper, an energizing bunny, a builder, a dear friend, and someone who changed the course of opera in this country. He always had a glint in his eye. His sense of humour was contagious, his circle of friends was immense, and he had a unique ability to motivate those around him to always bring their best game, and to accomplish things they never thought they could do. Alongside his many friends and close family, Bob also loved his dog Angus who brought him many years of companionship and joy.

Bob had a sharp mind that was sparked by his insatiable appetite for learning new things, blazing new trails, and reaching for the unreachable. He was the first Canadian invited to speak at the Opera Europa conference in Paris and was a member of the OPERA America Board of Directors. Education included graduating from the University of Manitoba with a Bachelor of Education (Music) Degree, arts management at Grant MacEwan University and The Banff Centre, and a Fellowship at Stanford University Graduate School of Business – Executive Program in Non-Profit Leadership – Arts.

He was the recipient of many awards including an Alberta Achievement Award (1988), Syncrude Canada Scholarship for Innovation in Arts Leadership (1992), Grant MacEwan University Alumni of Distinction Award (1994), Chalmers National Award for Achievement in Arts Administration (2000), the inaugural Rozsa Award for Excellence in Arts Management (2003), and a Queen Elizabeth II Diamond Jubilee Medal (2012). Bob was named to the Order of Canada (2013), received the Opera Canada Lifetime Achievement Award (2015), and was recipient of an Honorary Doctor of Laws from the University of Calgary (2016).

Bob will be missed by many loving family members including his mother Iona McPhee of Winnipeg; his sister Bonnie McPhee, her husband Jim Prokopanko, and nephews Chris and Matt Prokopanko of Minneapolis; his aunt Kae Nordman, and cousins Greg and Grant Nordman of Winnipeg; and his cousin Marilyn Kucherawy of Calgary.

Due to COVID-19 travel and gathering restrictions there will be no funeral, but a short selection of music curated by Bob himself to remember him by has been posted by Calgary Opera on Spotify. In lieu of flowers please consider making a donation to Calgary Opera – In Memory of Bob McPhee, the Chinook Lesbian and Gay Fund at The Calgary Foundation, or to the Winnipeg Boys’ Choir through the W.R. (Bob) McPhee C.M. L.L.D. (Hon) Fund at the Winnipeg Foundation