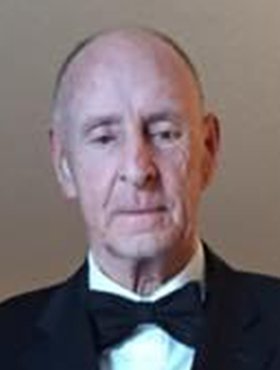 Allan was born in Govan Glasgow Scotland. He lost both his parents at a young age, and was raised by his maternal grandmother. After he finished school he became a heavy duty mechanic. He joined the Royal Electrical and Mechanical Engineers (REME) in the British Army. After he was injured during the Korean War, he returned back to Govan and worked as a motor mechanic.

In 1958 he met Ann Morrison and they were married in 1960, and had two children. They decided to follow Ann’s cousins Janette and David Dougherty to Canada in 1968. Allan started working for the Canadian Pacific Railway in 1969 he remained there for 31 years retiring in 2000.

Allan loved to hunt and fish. He talked a lot about fishing in Lake Minnewanka, and the Glenmore dam. He also enjoyed watching hockey games on television or going to the Corral to watch the Calgary Centennial games.

A few years after his wife Ann passed away he met Carol Tawtel in 2014. They enjoyed spending time together, and like to travel or go to the dances at the legion.

Allan was a member of the Royal Canadian Legion #285. He was on the Honour Guard, and loved to sell poppies for Remembrance Day.

Allan was predeceased by his wife Ann and his parents.

The family would like to thank the wonderful staff at Millrise Retirement Center for all the care they gave to my dad during his stay there.

A Private Funeral Service will be held, on Sunday, March 14, 2021 at 1:00 PM. Family and friends are invited to join Allan ’s service streamed live at Obituary Hyper Link for Online Obit on the day of the service. For those who are unable to view live, a recording of the service will be posted. Condolences, memories and photos can also be shared and viewed here.