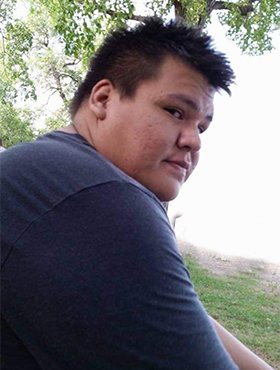 He moved to Calgary, Alberta in 2018.  Joel graduated from SIIT with a grade 12.

Joel had a passion for cooking and up until his death was always working toward his goal to be a Red Seal Chef.  He loved to travel, so he used his career to move around and visit different places while working. He worked at numerous resorts around Saskatchewan and Alberta and gained a lot of experience in different kitchens. Some days we would even compete who made the best meal at home and my mom wouldn’t have the heart to tell us who’s was better.

Joel was very family orientated and loved to help my grandma before she passed. Up until he passed, he helped daily with our mom and tried to give me breaks whenever possible.  Joel didn’t have children, but he treated his nephews and nieces like they were his own.  He would tease and laugh a lot with them.  Whenever any of them had a major event like a birthday, school achievement, band concert, etc. he was always there.

Joel loved live music concerts, so we attended quite a few together, he also enjoyed going with his other friends and cousins.  I tried to take my mom to see a Kiss concert, but she was worried about going deaf, so I took Joel.  I don’t think I’ve seen him yell around and have so much fun before as that show was once in a lifetime amazing.

Joel will be most remembered by his jokester personality and his strong sense of kinship to who he was close with.

Joel was very social, and it was rare that he didn’t make a friend everywhere he went.  He spent a lot of days watching movies, specifically Harry Potter which we would go together to watch in the theaters. He had many friends and many adventures with a million memories we all must cherish.