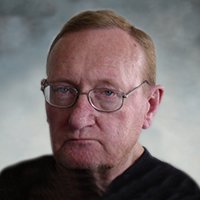 It is with a deep sense of loss that we announce the passing of Jake Unger of Calgary, AB, on Monday, February 8, 2021 at the age of 69 years after a long battle with Multiple Sclerosis.

Jake was born in Coaldale, AB, on December 20, 1951. In life, academia was not his calling and he became employed at Calgary Machine Shop at the age of sixteen for $1.00 per hour. He was proud to pay his mother her rent out of his slim paycheck and considered it a privilege. Mechanics was his passion and he built several hot rods before eventually acquiring a Harley Davidson motorcycle which was his pride and joy. Eventually he found more suitable employment with the MOT at the Calgary International Airport as foreman of the grounds crew. He was known for his ability to clean runways on two wheels. In 1987, Multiple Sclerosis struck and he went on disability to the progressive disease. Always of good spirit and with sympathetic ears for the troubles of others, he endured his ailment without ever a complaint. He took up online chess and was known to compete with international players at a fairly high level. As a youth his favourite movie was a Western, ‘The Good, Bad and Ugly’.  If one goes to their internet browser and plays the theme song of this movie they will be with Jake for a moment. A man of few but well chosen words, he especially loved children.

Jake is survived by his father Peter Unger of Oliver, BC, brothers and sisters, Erwin (Inge), Jeanne Blair (David), Victor, George (Marie), Robert and Cindy Rebiffe (Jeff); as well as many nieces and nephews.

He is predeceased by his mother Marie, and brother Peter Eric.