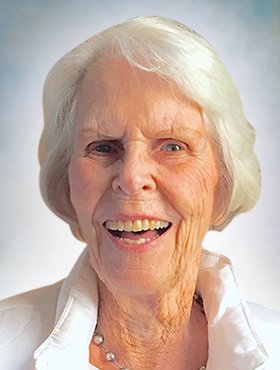 Bette Douglas, beloved wife of the late Bill Douglas of Calgary, passed away on Monday, February 1, 2021 at the age of 96 years.

Bette was born in Winnipeg, Manitoba on January 16, 1925, attended Kelvin High School and graduated from the University of Manitoba with a degree in Home Economics. Shortly thereafter, Bette married Bill in Winnipeg in 1946, prior to moving to Montreal where first son Stewart was born in 1949. After a brief stint in Toronto, Bette, Bill and Stewart moved to Calgary in 1951, where second son Scott was born in 1952. Bette immersed herself not only with the raising of her family and the growing of Bill’s business but was also an avid supporter of many local charities which encompassed her love of the performing arts.  From the beginning she was an enthusiastic member of the Samaritan Club of Calgary and this continued through much of her life. Bette accomplished much during her long life in Calgary, including sporting activities such as curling and golf, as well as lifelong learning that included extensive travel, ceramic potting, flower arranging, and conversational Spanish. Bette was also very passionate about golf (summer) and bridge (winter), becoming a very active member of the Women’s Section of the Calgary Golf and Country Club, which was like her second home for the past thirty plus years.

To honour her wishes, there will not be a service. Please forward condolences through www.hffs.com.

If friends so desire, memorial tributes may be made directly to the Samaritan Club of Calgary, Suite 503, 1500 - 14th Street SW, Calgary, AB T3C1C9, samaritanclubofcalgary@gmail.com, www.samaritanclub.ca, Thank you.