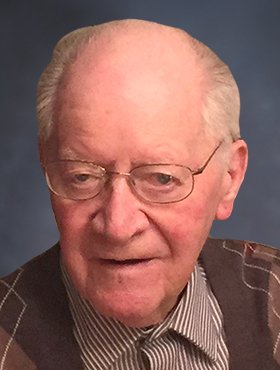 Gordon Foxcroft was born in Claresholm, Alberta on March 4th, 1920, where he attended primary and secondary school, worked on the family farm, and experienced many adventures in the Alberta foothills.  When Gordon was 17 he went to live with his Aunt Charlotte and Uncle Joe in Calgary where he worked at his aunt and uncle’s feed mill, slinging 100 lb feed bags. In 1940 Gordon enlisted in the Canadian Navy and was stationed on a mine sweeper for the duration of the Second World War. He met the love of his life “Muriel Kathleen Ennis” at a dance in Calgary and the two were married in June 1944 when Gordon was home on leave from the Navy. After the war Gordon and Muriel lived and worked in Calgary.  They both loved to dance and for 60+ years they spent many an evening and weekend round dancing and square dancing.  They travelled extensively around North America attending dance workshops and in the latter years became dance callers and choreographed round dances.  Gordon also loved camping, fishing, golfing and skiing.  He would tell the family stories of how he and his friends would take the train to Banff when he was a young man, sleep in the train station and the next day hike up Mount Norquay, before they had lifts to take you to the top!  They would come screaming down the mountain on their long wooden skis, cable bindings and leather boots. Gordon became a parts salesman for Chrysler during the early years after the war and was so successful in sales he was named the top salesman in Canada for Chrysler on many occasions.  He retired from Chrysler in 1985.

Gordon celebrated his 100th birthday last March 2020 and it was a very special time when relatives gathered together from all over North America to celebrate this milestone with him!

In lieu of flowers you are welcome to make a donation in Gordon’s name to a charity of your choice.