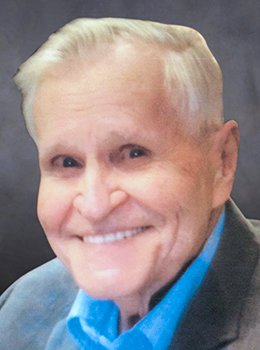 Ernie was the ninth of eleven children born to Henry and Matilda Felzien.

Ernie had a full and good life.  A career in the oil industry that took him around the world, to countries including Australia, England, Greece and various parts of Canada. At semi-retirement he returned to Forestburg Alberta where he was born to farm with his beloved wife Barb. They returned to Calgary where he filled his time by being the president of the condo board where they lived until Barb passed away.

Known for his organizational abilities, Ernie loved working with people and getting things done, with a twinkle in his eye and a bit of teasing along the way. His love of carpentry and building led him to doing home renovations in his retirement. He also led the restoration of Pleasington Lutheran Church in Forestburg, the church where he spent his childhood years.

During high school, Ernie attended Camrose Lutheran College, and later received the Augustana Distinguished Alumni Award in 1999 from there. Ernie was always involved in his church and looked forward to his eternal home in heaven.

Ernie had a great love of golf. He spent many of his retirement winters in Phoenix where he could play several rounds of golf a week while also enjoying the very pleasant weather there.

Ernie is survived by his three children, David (Bonnie May), Marnie, Glen (Bonnie), his two granddaughters Melody (Darren) and Chris-Ann, his two great grandchildren Devon and Ryan, his sisters-in-law Treva Felzien of Bentley , Janice Felzien of Forestburg, and his brother-in-law Vern Kubbernus of Airdrie.

Due to the present COVID restrictions there will be no funeral service at this time. A service will be held this summer at Pleasington Lutheran Church Forestburg Alberta.