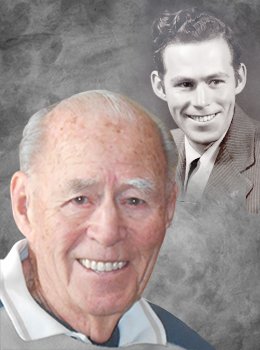 Arthur Laboret left this world on January 20, 2021 at the age of 94 and is now gratefully in the hands of the Lord.

Husband, father, papa, great-grandfather, brother, uncle and friend to many, he loved nothing more than to crack a joke or tell a story to make people laugh and smile. He was also the eternal optimist.

After spending his childhood years in Regina, Art and his family planned to move to California but their car broke down in Calgary and they decided to stay instead of continuing on.  Art never left Calgary after meeting his lifelong love Arlie and starting their family.  He was a very active man and was proud to say that he always "kept his wheels turning".  He was a boxer in his late teens and moved on to become a trainer of racehorses in Western Canada, USA and Mexico. Eventually he moved into sales positions in the steel industry and also spent many years working as a travelling salesman. Art was a long-time member of the ACT (Associated Canadian Travellers) and he golfed for many years at the Calgary Elks Lodge and Golf Club.

Art is survived by Arlie, his loving wife of 68 years.  They had three children, Debra (David), Duane, and Deanna (Steve) as well as three grandchildren, Jenna, Jessaca, and Mark, and a great-granddaughter Khaleeci. He will be deeply missed, forever loved, and never forgotten.

A private memorial service will be held at a later date.