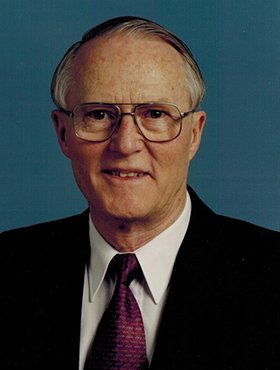 Bill passed away peacefully with family by his side on Thursday, December 3, 2020 at the age of 86.

Bill graduated from the University of Oklahoma in 1957 earning a B.Sc. in Petroleum Engineering and while there, became a lifelong Oklahoma Sooners fan. He went to work for Hudson Bay Oil and Gas in downtown Calgary where he met Carol, they married in August 1959.

In 1968 Bill and Carol purchased the Mt. Norquay ski area in Banff, Alberta which they operated for the next 10 years. Returning to Calgary, Bill resumed work in the oil patch as a consulting engineer while obtaining his Realtors License. He retired, an award winning Realtor, from Calgary RE/MAX Realtors in 2012.  Bill served on the Board of Directors for the William S Herron Family Charitable Foundation helping to identify and direct funding to worthwhile causes in Calgary.

Bill was an award winning rodeo competitor as a young man, holding trophies from the Calgary Stampede (among others) for Brahma Bull and Bronc riding, as well as Cutting Horse competition. He played commercial league football and polo as an adult, and enjoyed hunting, skiing and golf. Both Bill and Carol were private pilots and travelled the country in their airplane.

Bill will be most remembered for his kind nature, calm, practical approach to life and love of cats, kids, dogs and horses, in no particular order!

A private family service will be held at Queen’s Park Cemetery.

The family extends their heartfelt thanks to the Doctors, Nurses and Nurses Assistants of Units 47 and 58 at the Rockyview General Hospital for the compassionate, kind care you gave our beloved Bill. Truly you are Heroes.