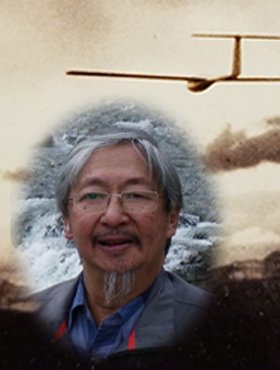 He was born and raised in Calgary, Alberta.  In the 1980’s, Yon moved to Black Diamond and made his presence known there with his volunteer commitment to the fine arts, one of which was as an original volunteer that put on the annual Diamond Valley food bank Christmas concerts that lasted many years.

Yon was that rare combination of a person who excelled in many areas but had no inflated ego.  He was an accomplished guitarist and had a particularly fine ear for well crafted music; he particularly loved talented female vocalists. During his younger years, he learned to play the piano, which led him to teaching himself to play the guitar.  Another fond “noisy” memory, he was a drummer with a group of friends jamming in the family home basement through his teen years.

His career passion was working with wood, which was borne out by the beautiful furniture he made.  For example, one piece was a coffee table with a Chinese motif that he made for his mother.  His carpentry projects were crafted with such skill that he would sometimes use a razor knife rather than a pencil when marking cut lines.  Yon also developed a keen interest in flying, both model planes and real gliders.  As well, Yon’s computer knowledge was well known in his community.  He was the “go-to-guy” for any computer problems.

He was also responsible for creating a lasting legacy by coming up with the idea of video recording Beneath the Arch music concerts.  Yon spent hundreds of volunteer hours editing the footage to produce a very credible archive for the performers.  A passion for fine foreign films led to Yon’s creation of the Dog Tooth Film screenings at his local library where the spectators were treated to some great movies.  Other interests included star-gazing, horticulture, bird watching, sports enthusiast, traveling.

Another major interest for Yon was his love of good delicious food, whether it was the great meals that came out of the home kitchen, while growing up, or the many get-togethers to celebrate special events, such as birthdays and Chinese New Years.  In his later years, he was always trying out different baking recipes, becoming proficient in making barbecued pork buns.

He was a romantic, a softie, and a friend to all (not making enemies).  Yon will be missed by many. He will be remembered by all who knew him as a true gentle man.

He is survived by two sisters, Sandra Wong of Cochrane; Alberta, Freda Hopper (nee Wong), of Richmond BC; companion Jackie Blight as well as many friends.

He was predeceased by his father Fook in March 1976 and his mother Shirley in March 2011.

A celebration of life is planned for his birthday July 10, 2021, venue to be determined.