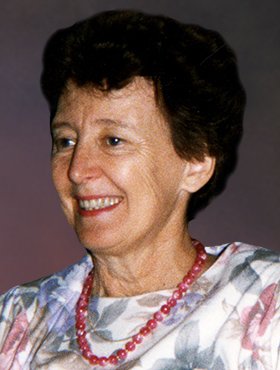 Noreen Dobson (nee Gleeson) passed away on Wednesday September 2, 2020 surrounded by the love of her family.

Noreen was a trail blazer.  She was one of only two women in her class at the University of Manchester in the school of Mathematics where she achieved a Bachelor of Science.  She immigrated to Canada crossing the Atlantic on the Queen Mary in 1958 with her husband Norman and infant son Graham.  Newly arrived, she lived in Fabreville, Quebec where she met many life-long friends who had also moved to Canada to start a new life.  Her children Gary and Kimberly followed in fast succession.  When Norman returned from work in the evening Noreen commuted to Montreal and attended Sir George Williams University (Concordia) where she achieved her Masters in the Teaching of Mathematics. She taught mathematics at Sir George Williams University, Vanier College in Montreal and then for many years as a member of the Faculty of Mathematics at John Abbott College, Ste. Anne de Bellevue.  Noreen loved her teaching career and was an esteemed instructor of Mathematics.

The family settled in Westmount, Quebec for many years and then moved to Pointe Claire, Quebec.  She had many friends in the ball room dancing community and amongst the professional teachers of mathematics, physics, and chemistry at John Abbott College.  She was immensely proud of her mathematics career and her retirement at age 65 was a transition accompanied by widowhood and a move to Calgary to be close to all her children and grandchildren.  Noreen loved to walk her dogs by the Bow River near her home in Montgomery and continued to enjoy dancing with the Silver Stars dance troupe.  Many dance classes followed as well as travelling before she slowly became less active.

Noreen’s British, dry wit never left her.  This, combined with never suffering fools and her sharp intellect, resulted in innumerable situations where she would engage in discussions on any topic and end those either by having made her point clear and or disarming her provocateur with a wry comment that was both true and humorous, at times cutting them off at the knees.  She could see the ludicrous in any situation and would create much laughter for those around her when pointing it out.  Her ready smile was charming and she was ever the lady of her British upbringing.

She was predeceased by her husband Norman Dobson.

The family wishes to extend their gratitude to all the staff at Staywell Manor, The Manor Village Life Centre community where she spent her final years.  Noreen enjoyed living at Staywell Manor and said many times that she was content and happy there, her new home.  She enjoyed all the activities and was tenderly cared for by this marvelous community of exceptional people.

To plant a tree in memory of Alma Dobson, please visit Tribute Store