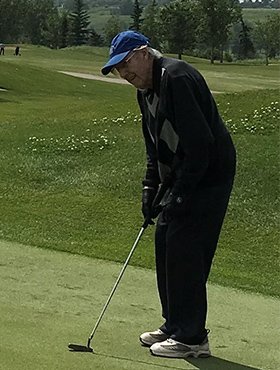 Doug was born October 19, 1926 in Toronto.  He moved to Calgary in 1930 with his parents Bill and Martha.   He went to school in Calgary and joined the Army when he was 18.  After WW2, he attended University of Alberta enrolled in Petroleum Engineering.  He temporarily returned to Toronto area where he met his wife to be Elva. They married in 1927 and moved back to Edmonton to complete his Engineering degree and to start their family.  They had four boys Randy, Ric, Don and Dave.  They moved to Calgary in 1955 where he worked for Texaco until his retirement.

Doug enjoyed summers at their cabin on Little Shuswap Lake, skiing and volunteering for Sunshine Ski Patrol near Banff during the winters.  Upon retirement, they grew wings and became Snowbirds.  They became avid golfers and golfed year-round down south in the winters and Kelowna in the summers.  They were blessed with long healthy lives doing everything they loved.

He was predeceased by his son Ric (Gae) and his beloved wife Elva of 70 years.

The family is thankful for and grateful to all the caring staff at AgeCare Skypoint Hospice that took care of Doug during his final days. We are also greatly appreciative of the care and services provided to Doug and Elva while they lived at Evanston Grand Village in the Independent Living section of the facility.