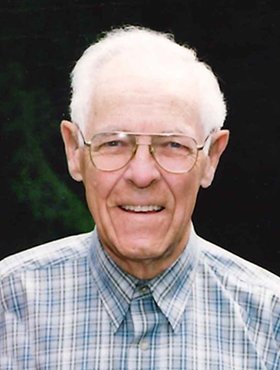 Garnet Ritchie beloved husband of Doreen Ritchie (nee Bagrie) of Calgary, passed away on Saturday, July 11, 2020 at the age of 95 years.

Garnet was born in Calgary, Alberta on April 4, 1925.  He grew up in Inglewood, and enjoyed spending time as a child at the small farm where his grandparents resided, on the western outskirts of the city. He was very proud to be a “native Calgarian”.

As a young man Garnet joined the RCAF.  He served in Canada from coast to coast, Gander to Comox.  He joked that he did actually serve overseas, as Newfoundland had not yet joined Confederation.  Upon his discharge, he returned to Calgary and attended Business College. For the vast majority of his subsequent career, Garnet was a dedicated production accountant at Husky Oil. During his 38 years with Husky he supported many different management and ownership regimes, through periods of dynamic change in both the company, and the Alberta oil industry. He was particularly proud to work for the company whose novel new tower dominated the Calgary skyline, later to be renamed the Calgary Tower.

Garnet married Doreen in 1952 and settled in downtown Calgary.  It was 6 years later that they purchased their first home and began their family in the community of Thorncliff. His career took him and his family to Lloydminster in 1964, where he worked at Husky’s primary production facility, returning to Calgary in 1969. He was a conscientious family man and provider.  For a while he moonlighted as a taxi driver to expedite ownership of the new house in Huntington Hills. After all, he did know Calgary like the back of his hand. The second job also financed the holiday trailer which facilitated many camping and fishing weekends out in the hills and mountains. Garnet finally retired from his position as, “Mr. Husky” in 1990, to pursue his own hobbies in the wood shop and on the golf course, and continued to tinker with mechanical projects.

Garnet was a busy and practical gentleman; everyone he met quickly grew to like him. He was a good man with simple tastes, and was always easy to please.

Garnet spent the last year of his life at the Colonel Belcher and thoroughly enjoyed his time there under the care of amazing and dedicated staff, who worked hard to create a good life for their residents, while dealing with all the additional challenges created by covid. Having a beer and a visit with his fellow veterans in the pub downstairs provided him much enjoyment in his final days.

Garnet was predeceased by his parents Blanche and George and his sister Irene.

Share Your Memory of
James
Upload Your Memory View All Memories
Be the first to upload a memory!
Share A Memory
Plant a Tree
Admin Login | Website powered by FuneralTech & TA