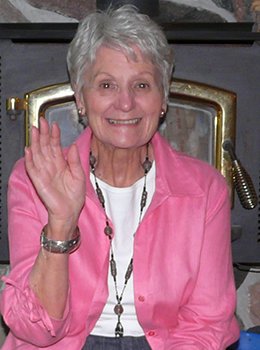 Delphine was born to Ernest & Alice (Didier) Cameron and raised in Capreol, Ontario.

Growing up in a railway town by the Vermillion River with her six younger brothers.

After enlisting into the RCAF in 1942 Delphine was posted to Camp Borden, Ontario and later to air training bases at Claresholm and Vulcan, Alberta where she primarily logged training flights.

Faith played an enormous part in Delphine’s life. At the end of the war she married Charles Large an Anglican minister whom she knew prior to the war and together they raised their children John, Mark (Caroline), Mary (Tom), Peter, Elisabeth (Duncan). She was predeceased by her husband in 1982 and her former daughter-in-law Linda in 2018. Delphine leaves behind 5 children, 11 grandchildren and 18 great grand children.

Delphine lived in many beautiful places close to nature: Capreol, Parry Sound, Nipigon, North Bay and Victoria. It was an inspiration for her creativity. She expressed this through crafts, gardening, pottery, watercolour painting and photography from Brownie to digital. Her interests allowed her to connect to and learn from many different people around the world.

Self taught on the computer Delphine spent 10 years researching her Cameron geneology and published her findings in 2014. A big joy was connecting with lost relatives.

Being a self confident woman she was not afraid to explore new things. Her beautiful smile, royal wave and deep hearty laugh will be missed.

Delphine’s last 18 months were spent in Calgary at Colonel Belcher Long Term Care. While she didn’t die of Covid she passed away during the time of Covid. Her family wishes to thank ALL the staff and her health care team for their loving care and support.

Delphine expressed her wishes for any donations to be made to The Poppy Fund, The Primate’s World Relief and Development Fund or The Art Gallery of Greater Victoria.

1973  Board of Directors of Ontario Craft Foundation