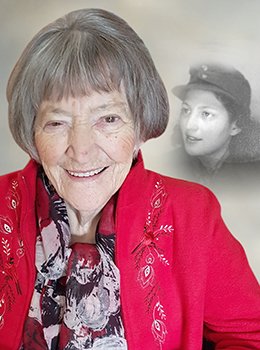 It is with deep sadness that we announce Anita Demetz, beloved wife of the Late Otto George Demetz of Calgary, passed away peacefully with family by her side on Thursday, May 28, 2020 at the age of 94 years.

Anita was born in Oberdrauburg, Austria on January 27, 1926. After attending nursing school in England, she worked in Paris as an au pair and then immigrated to Canada in 1954. Shortly after arriving in Montreal, Anita met a young silver-tongued salesman named Otto whom she married in 1956. Together they lived in various provinces across Canada, raising a family and eventually making Calgary their permanent home in 1970.

Anita’s greatest joy was her family. She doted on her children and grandchildren with a tenderness and patience that was incomparable, never judging their choices and always proud of their achievements. Her genuine warmth, gentleness and hospitality welcomed everyone into her home. There are many fond memories of wonderful Austrian-style dinners followed by a competitive game of Canasta and accompanied by lots of laughter!

Anita got great pleasure from gardening, walks along the Bow River escarpment, downhill skiing and travel. She also loved to read, often trading books with family and friends.

Anita is survived by her daughters Michelle (Sigi) Holzner, Gaby (Paul) Rogers and Jackie (Allan) Thorne; and her treasured grandchildren Claudia, Allyza and Simone. Anita was predeceased by her husband Otto, and her sons Rudy and Danny.

The family is most grateful for the dignified and compassionate care provided by all of the staff at Holy Cross Manor. Anita truly felt at home there.

A celebration of Anita’s life will be held at a later date. If desired, memorial donations may be made to a charity of your choice that serves the elderly.

Rest peacefully sweet Anita, your humility and beautiful smile will be deeply missed.