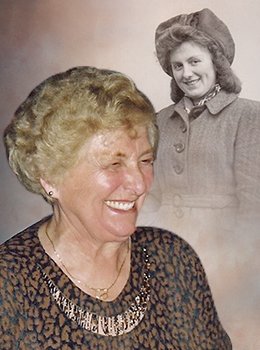 It is with great sadness that we announce the passing of Hedwig Lemmer, wife of Heinrich Lemmer, mother to Heinz (Susan) Lemmer with grandchildren Kyle and Melissa, and Ruth (Quentin) Goodbody with grandchildren Emma and Tristan, on Thursday, May 21, 2020 at the age of 94 years at the Brentwood Care Centre.  She was predeceased by her husband Heinrich in 1991, and son Heinz in 2019. Hedwig was the 2nd oldest of eight children born to Emma (Glasmeyer) and Franz Stermann. She worked as a salesclerk in Bad Bentheim, Niedersachsen where she met Heinrich Lemmer, freshly returned from the Second World War. They planned to wed among family and friends in 1954; however, Hedwig’s cousin, Frank Schmiemann, newly immigrated to Canada, wrote them about great opportunities in Calgary, Alberta. On short notice, Hedwig and Heinrich decided to forego their wedding ceremonies and immigrate immediately to Canada. In Bremen they were told that they needed to be married to travel together. They found a Catholic priest and a witness, arranged for exchange of marriage vows, purchased tickets and boarded the SS Bremen to arrive in Montreal 10 days later. After three further days and nights of travel by train they arrived in Calgary, greeted with flowers by Frank. Heinrich, a newly minted butcher and sausage maker by trade, started 3 days later with Butchers and Packers Supplies, and Hedwig took a job as a housekeeper. In 1955, they opened up Calgary’s first German butcher and sausage store in Bridgeland (The Old Country Sausage Shop – later renamed as Lemmer Sausage Ltd.) where they produced and sold quality meat and sausage products, delicatessen items, and bread from the Four-Star Bakery. With enthusiasm, unflinching attention to quality and hard work, their business thrived. They were active members of St. Boniface German-Catholic Church and the German-Canadian Club. Hedwig’s charm, enthusiasm for life and her sparkling laughter earned her long-lasting friendships and admiration. She loved dancing, swimming and walking outdoors. When Hedwig entered the room – always stylish – she radiated energy, warmth and positivity. She was a wonderful cook, baker, and knitter, and delighted in sharing delicious meals with family, friends and her beloved grandchildren.

In her later years Hedwig succumbed to dementia and although mostly cheerful, she lost much of her acuity. Our heartfelt gratitude goes to loving caregivers Joan Beaubien and Kathy Lines, and her hairdresser, Brenda Gosselin - who kept her stylish and pretty.

We pay tribute, appreciation and gratitude to the staff at the Brentwood Care Centre. Their warmth, humanity and professional care was a blessing, and very much appreciated over these past years.

Due to the current COVID restrictions, a private family gathering and interment will be held, with Father H. Rosenbaum officiating.