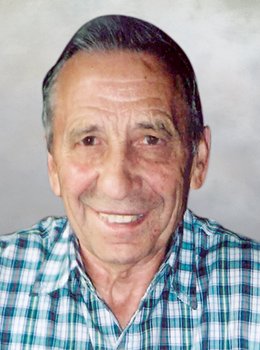 Eduardo Pereira, beloved husband of Maria Pereira (nee Cabral) of Calgary, passed away on Wednesday, May 13, 2020 at the age of 87 years.

Eddie was born in Sao Miguel, Azores, Portugal, growing up and working on the family farm.  In 1956 and 1958 he participated in a government sponsored program recruiting immigrants for farm camps in B.C. Arriving in Canada, Eddie felt this would be his new home.  He returned to Portugal in 1960 to marry Maria.  Together they made the decision to immigrate to Canada with two goals; create a better life for themselves and to ensure their children would attend university.  Eddie arrived in Toronto in August 1960 and was joined by Maria in May 1961.  Four months later the two boarded the CP Rail train and travelling west, became the 7th Portuguese family to settle in Calgary.

Eddie’s family was always close to his heart.  His first daughter Peggy Anne was an early Christmas gift born December 1962.  In June 1965, the arrival of his second daughter Allison completed the Pereira family.  Eddie and Maria became proud Canadian citizens in November 1964.

Together they raised their daughters honoring their Portuguese culture within the home.  This included making wine, cooking meals and baking, tending the gardening, attending events at the Portuguese Club, going to Catholic Mass and most importantly speaking Portuguese.

Eddie enjoyed making wine and always invited anyone over for a glass or two.  He was famous for growing delicious potatoes and garlic which he graciously shared with friends and neighbors.  His culinary expertise included only two gourmet recipes; French fries and French toast which the girls loved to eat.

Eddie was passionate about driving!  He got his driver’s license and bought his first car in 1962. Family vacations were mostly road trips from B.C. to Ontario and the western United States.  He was thrilled to take his daughters to Disneyland in 1974.  His most memorable trip was in 1985 as Maria’s family and their childhood friends went on a pilgrimage to Portugal, Spain, France, Italy and Israel where Eddie and Maria celebrated their 25th Anniversary.

In July 1986, David became Eddie’s son-in-law and favorite fried chicken eating buddy as well as sharing pizza and bacalhau (cod).  They loved making and drinking wine together and enjoyed cognac.  They liked hanging out at hardware stores, watching the CFL and going for walks.

Sadness struck the Pereira family in October 2001 when Allison passed away after a lengthy illness.

In his working life, Eddie was a laborer working for PCL Construction and Ellis Don.  He specialized in cement work.

He always pointed out buildings the he proudly worked on.  Eddie retired in September 1997 and eased into a comfortable life enjoying his family and his garden.

In June 2017 Eddie was diagnosed with mesothelioma and lupus.  Maria left the family home in December to live at St. Teresa.  Eddie began to require assistance to continue living in his home and this was enabled by the care he received from Peggy Anne and David.   His desire was to pass away at home and he almost made it except for the last two weeks of his life.  Eddie passed away at the Agape Hospice on May 13th which is the Feast Day of Our Lady of Fatima, a day of significant faith in the Portuguese culture.

Eddie often said he never expected to live this long.  Did he and Maria accomplish their two goals?  Yes, they created a life better than they could have ever imagined and yes, both girls attended university, making their parents proud.  Eddie and Maria’s determination, work ethic and strong faith and love endured through 60 years of marriage.

Eddie will be greatly missed by those whose lives he touched with his broken English accent, his generosity and kindness and the innocent way he approached life.

A private service will be held by the family.

A public celebration of Eddie’s life will be announced at a later date in the Fall.