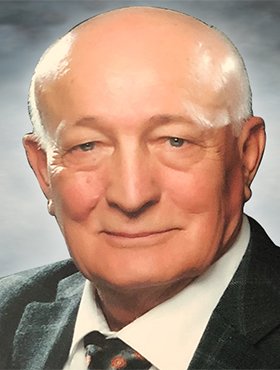 It is with great sadness that the family of William (Bill) Bugo announces his peaceful passing on May 8, 2020 at 82 years of age in his home with family members at his side.

Bill was born in Camrose, Alberta in 1937 to Paul and Veronica.   He was raised in Camrose and Edmonton where he met his wife Lavina.  He started his work career with Chemical and Geological Labs when they had one lab in Edmonton and Calgary (Canada Core). Soon after they moved to Calgary and following this was a move to Fort St. John, B.C., then they moved back to Calgary in the late sixties.  During this time, he rose to Vice President and helped expand the company to five laboratories in three provinces.  Due to his hard work he was fortunate to be able to retire at the age of 54.  He spent the next twenty-eight years golfing all summer and curling in the winter.  Before Lavina passed they spent time between Calgary, Arizona and their place at the lake.  As a younger man he would drive his Volvo in rally races and even had his private pilot’s license for a few years.  He would hunt moose which helped feed the family while living in northern B.C., was a volunteer firefighter and loved to fish.  He kept active while battling cancer for the last fifteen years, always on the go leaving the house every day for an activity.

He was predeceased by his loving wife of 43 years Lavina in 2004, his brother Paul and beloved sister Verona.

A private family service and interment is planned.

Both William and his wife were taken by cancer, and in lieu of flowers, his family wishes that in his memory those who so desire, to please donate directly to the Alberta Cancer Foundation Provincial Office, Sun Life Place, 710, 10123 – 99th Street, Edmonton, AB T5J 3H1 Telephone: 1(866) 412-4222.  https://www.albertacancer.ca/donate/

The family would like to thank Dr. Lau at the Tom Baker Cancer Centre who took great care of William.