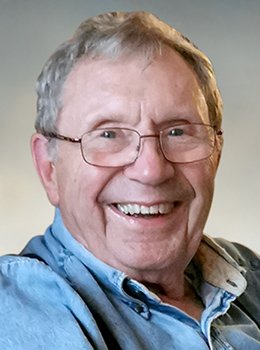 Bob arrived safely Home into the arms of Jesus on Saturday, May 2, 2020. Bob began his life of this earth on August 15, 1939 in Olds, Alberta. He was born early at 4 lbs and was sent home fitting into a shoebox lined with gauze and was kept warm on the oven door. From Olds, the family moved to Ponoka in 1941 and in 1948 they moved to an Alaska Highway Maintenance Establishment in the Yukon called Brooks Brook, located at Mile 830 of the Alaska Highway. He moved to Ft St John, BC in 1954 to attend school and graduated from North Peace Senior Secondary in 1958. From there, he spent time in Red Deer, AB, got his pilot’s license in Watson Lake, Yukon, and then studied Aeronautical Engineering at SAIT in Calgary. In 1962, Bob made a life changing move to Montreal, Quebec to work for United Aircraft. It was there that he met and fell in love with the love of his life, Barbara Watson. They were married on July 17, 1965. In 1967, they decided to leave Montreal and head back west to a smaller city, Calgary, to raise a family. This would be the final move for Bob as Calgary quickly became home. Bob began working for Union Oil and their first child, daughter, Wendy, was born in 1968 followed by their son Glen in 1970. Throughout the ups and downs of the Calgary economy, Bob also worked for Husky Oil, TransAlta, Cantera Energy, DMR Consulting, The City of Calgary, finally retiring in 2005 while working for the Calgary Zoo. He worked in various IT and Project Management capacities and was known by many he worked with for his integrity and pragmatic ways. Not one to sit still long, three weeks after retiring, Bob came out of retirement and he began working for Brentview Baptist Church where he served as their administrator for 11 years. To keep himself busy after retiring from Brentivew, he found a job with Royal Oak Lexus as a driver. While he enjoyed interacting with the people and exploring the city, he decided to retire completely and do a bit of travelling and spend some precious time with Barb. Bob was a handy kind of guy to have around the house and had no fear tackling any repair project, especially if it meant a trip to the hardware store for a new tool. He and Barb made a great team in their back yard and together spent many hours together creating an oasis that featured in several wedding photo shoots. Bob loved watching the Stampeders and had seasons tickets for many years. Most of all, Bob loved his friends, his family and his Lord. Whether it was sitting in his office yakking over a coffee, going out for a lunch with friends and colleagues or finding the perfect recipe to make for an evening in with friends. Bob had a gift with people. His bigger than life smile, the twinkle in his eye, his sincere handshake, his laughter, a hearty ‘It’s all good!’, and his relaxed countenance attracted people to him and his friends were rewarded with a strong loyalty. He was engaged in his kids’ lives and was always there with an ear to listen with, advice when requested, elbow grease when a project was at hand, and a hug when needed. He loved supporting his grandchildren in all of their endeavors, whether travelling to see them acting in plays, watching them at dance competitions, attending their music recitals or cheering them on at football and ball hockey games. The strongest legacy he leaves is his love for his bride Barbara. He loved spending time with her, travelling with her, buying jewelry for her and cooking for her. He cherished and adored her, and it was obvious to all who saw them. Medically, he had some challenges his entire life resulting in a total of 26 surgeries. He was strong, resilient and a beautiful example of perseverance. This last challenge, metastatic cancer in his hip bone, was a hard fought one. Throughout it, as in all of the other medical challenges, we always heard the same thing from the medical staff, “We love Bob, he has the best smile and attitude and makes us feel better when we should be making him feel better.” The family would like to say a special thanks to all of the medical professionals that have taken care of him over the years, including but not exclusive to: Dr Peters, Dr Reuther, Dr Pulaski, Dr Kowakami, the staff on Unit 32 at the Foothills Hospital and the wonderful staff at Dulcina Hospice who, despite the challenges of COVID-19, did so much for our family. Bob is survived by his wife of 54 years, Barbara (Watson), his daughter Wendy (Matthew) O’Blenes and their children Colleen, Kimberly and Daniel; his son Glen (Tracey) Gebert and their son Nigel (Emily) Gebert; his sister Karen Fedderly; his sister Sandra (Klaus) Gerhardt; brother-in-law Don (Pattie) Watson and 7 nieces and nephews and his cousin, Cherie Parry.  He was predeceased by his parents and his brother-in-lay, Roy Fedderly. Bob was also predeceased by his granddaughter, Gillian O’Blenes-Kaufman, who was waiting in heaven to welcome him. In lieu of flowers, the family requests you consider a donation to Brentview Baptist Church, Centre Street Church, the Alberta Cancer Foundation or St Marguerite Manor – Dulcina Hospice c/o Covenant Foundation.

Philippians 1:6 “…being confident of this, that he who began a good work in you will carry it on to completion until the day of Christ Jesus.”