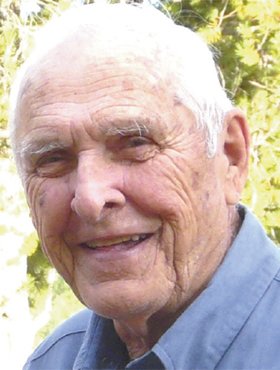 We are deeply saddened by the sudden loss of our husband, Dad and Pop early in the morning of April 11th. We are comforted knowing that he didn't suffer, but quietly slipped away in his sleep.

Allan was born in a house on Observatory Street in Nelson, BC, April 2nd, 1926. He spent his early years in the Kootenays - Marysville and Nelson. It was here he

acquired his love of the outdoors, particularly fishing. He fondly remembered those days "bumming around with friends", driving the express truck in Nelson or

working for Cominco in Kimberley. Upon receiving his Degree in Agriculture from the University of Manitoba in 1950, Allan moved west to work at UBC in the Extension Department where he met and married our Mom, Marion Moodie in 1955. A move to Kitimat, BC followed the next year when he was hired as Alcan's Assistant Recreation Director. In 1958, he and Marion moved to Edmonton where he became an Assistant Professor in the Extension Department at the University of Alberta. In 1963, he was hired by the Calgary Board of Education to spearhead the first Adult Education Department in Western Canada. His career with the CBE saw him as a creative, adaptive visionary, never afraid to ask for the moon and "well we didn't win a lot today, we will give it hell tomorrow." Allan was humbled to be one of 8 educators in Alberta who was invited to serve on the Worth Commission, "A Choice of Futures" (1969 - 1972). He was the brains and catalyst behind starting the Louise Dean School for Single mothers in 1970 and also the Alternative High School - both these exemplary programs were ahead of their time under his leadership. While with the CBE, he completed his Master's Degree at the University of Edinburgh in 1979, where the family lived for a year. As a result of a heart attack on Valentine's Day 1981, Allan retired from the CBE. Retiring due to health issues in the prime of his career was very difficult for him. Dad was extremely well read and a collector of amazing books and postcards. Never shy from engaging in conversation with anyone of any age, he had time for people from any walk of life. Beyond his family and education, his true loves were travelling the world with Marion, spending summers at the family home in Balfour, BC, and of course fishing. Balfour became a place where friends from around the world gathered for everything from a cup of tea to a couple of weeks. Pop took great pride in experiencing his grandchildren's growth, always curious about their studies, careers and activities. Over the past few years, he found great joy in sponsoring his youngest Grandson's learning to play the bagpipes.

A special thanks to our Mom, for the 64 years of unwavering support she provided Dad, helping him accomplish so much in his lifetime. The family would like to thank the many healthcare professionals involved in Allan's care over the last 39 years. A special heartfelt thanks to Dr. Andre Ferland for his 20+ years of exceptional care, compassion and dedication.

Allan is survived by his wife of 64 years, Marion, their children Carol (Jamie), Sandra (Ed), Janis, and Brian (Nancy) and grandchildren Rachel, Andrew, Jeremy (Emily), David, Ethan and Sophie, who each had a special relationship with their Pop. He will be dearly missed by friends and family the world over.

At his request, no service will be held. If friends so desire, in lieu of flowers, donations made to the Heart and Stroke Foundation of Alberta would be appreciated.

If friends wish, please forward condolences and memories to allandmemorial@gmail.com.